The Global Macro Monitor have published an exhaustive study of the U.S. labour market trends over the first 15-16 months of the President Trump's tenure. The  post is long, brilliantly detailed, and empirically and intuitively flawless (yeah, I know, I don't think I ever used this descriptor of an economics research piece before). So read it in full here: https://macromon.wordpress.com/2018/05/15/deconstructing-the-u-s-jobs-market/.


In short, read the original post - it is packed with highly informative and very important data and observations! 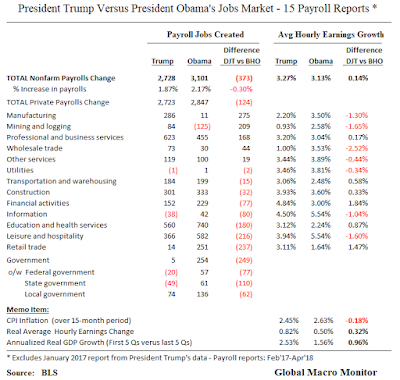 There is a lot that can be criticized in the GOP/Trump tax reforms passed late last year, but some things do make sense. Back in November 2016, in my column for the Cayman Financial Review (see here: http://trueeconomics.blogspot.com/2016/11/31116-cfr-tax-cure-for-american.html), I argued that a comprehensive tax reform of the U.S. corporate tax system, alongside a generous repatriation scheme for off-shored profits of the U.S. MNCs can provide a significant boost to the U.S. economy.

Today, we got some news confirming my assertion. Apple is planning to bring some USD350 billion back to the U.S. with a large scale investment portfolio aligned to this repatriation: https://www.cnbc.com/2018/01/17/apple-announces-350-billion-investment-20k-jobs-over-5-years.html.

However, to really lock in the new investment, President Trump and the Congress need to significantly revamp the existent system of work permits, work and business visas, starting with the current H1B system. Returning financial capital back to the U.S. is but the first step on the road to increasing the U.S. economic potential.

The second step must be opening up U.S. labor and entrepreneurship markets to inflow of talent from abroad (these markets are currently extremely closed). This will require not only revising numerical quotas, but also the following:

The third step must involve regulatory reforms that remove markets, financial & contractual supports for incumbent monopolistic firms (the rent-seekers, like big telecoms, large banks, automakers, etc). Opening the sectors to genuine competition will be the only chance the U.S. has to compete with the likes of China, and increase its own potential GDP).
Finally, the fourth step (partially already targeted by the recent tax reforms) must involve reducing the burden of direct and indirect taxes on the American wage earners, especially those with higher skills levels. The key here is to focus on both, direct and indirect taxation, and the latter, in my opinion, includes the cost of healthcare and pensions.
Apple's announcement is the good news. And President Trump does deserve credit on this.  But tax holiday alone won't fix the problem of economic sclerosis that has plagued the U.S. economy for a good part of two decades now.
My recent contribution to Manning Financial for Summer 2017 is available here: http://issuu.com/publicationire/docs/mf__summer_2017?e=16572344/49275504 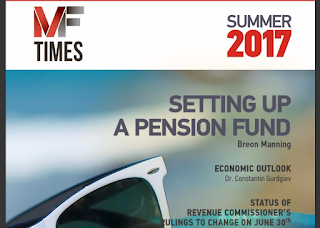