Recently released data on 2011-2016 Irish Government financial metrics shows that despite all the reports concerning the adverse impact of austerity on Irish Government employees, there is hardly any evidence of such an effect at the pay level data. 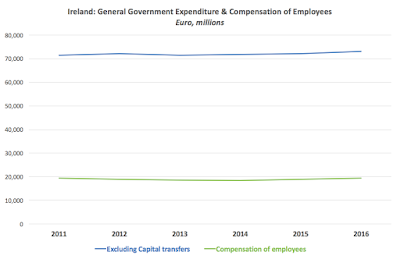 Statistically, there simply is no evidence of any material savings delivered by the 'austerity' measures relating to Government compensation bills. 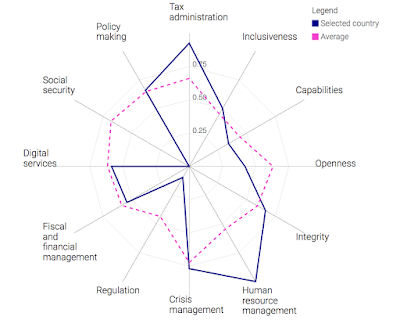 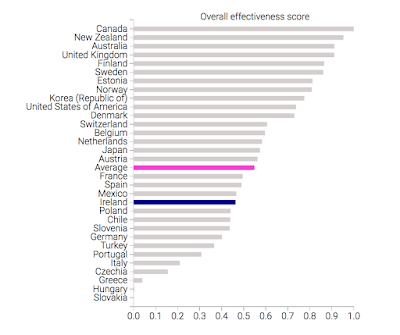 In fact, Ireland ranks 20th in terms of overall Civil Service Effectiveness assessment, just below Mexico and a notch above Poland. Within index components, Ireland ranked:

So while managing to score at the top of the league of countries surveyed in terms of pay, perks, hiring and promotion, Irish Civil Service ranked within bottom 10 countries in terms of areas of key performance indicators, relevant to actual service delivery, with exception of one: Tax Collection. May be we shall call it Pay, perks & Tax Collection Service?

But, hey, know the meme: it's all because of severe austerity-driven underfunding... right?..

In response to my post, the Press Office at Dept. of Public Expenditure and Reform posted the following, quite insightful comments on the LinkedIn, that I am reproducing verbatim here:

Secretary General Robert Watt: I was interested in reading this comment – and in particular the data on civil service performance.  There are methodological issues with the Study quoted.  Nevertheless readers might be interested in other data about the effectiveness of the Irish civil and public service which might give a more balanced assessment of performance. Important to consider the evidence before we reach conclusions.  Also, important to note difference between Civil Service (36,000 staff) and wider public service (320,000 staff)

Over a range of international rankings, the IPA’s annual public service trends publication shows the Irish public service performing above average on many indicators.


The OECD’s Government at a Glance, published in July 2017 shows Ireland ranking strongly across a range of metrics although healthcare is a notable exception:


Lots done but more to do!

Thanks for the comments on this, Press Office at Dept. of Public Expenditure and Reform. I got similar methodological comments regarding the robustness of the Oxford study via Facebook as well and, as I noted, in the technical analysis part of the paper, Oxford centre does show improved metrics for Irish civil service performance in the later data, which is heartening. Also, noted the apparent dispersion of scores and ranks across countries, with what we might expect as potentially stronger performers being ranked extremely low. Also, noted the issue of data on Social Welfare for Ireland being skewed out of OECD range and impacted by 2011 legacy issues (although it is unclear to me how spending via health budget on social welfare is treated in the OECD and Oxford data). I will post your comments on the blog to make sure these are not lost to the readers.


I agree: lots done and certainly more to do, still.