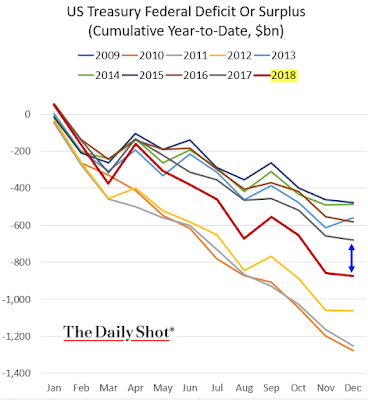 U.S. Federal deficit was up $192 billion y/y in December 2018. Nothing to worry about, as fiscal prudence has been the hallmark of the Republican party policies since... well... since some time back...  That, plus think of what fiscal surplus will be once Mexico pays for the Wall, and Europeans pay for the Nato.

U.S. Federal deficit was up $192 billion y/y in December 2018. Nothing to worry about, as fiscal prudence has been the hallmark of the Republican party policies since... well... since some time back...  That, plus think of what fiscal surplus will be once Mexico pays for the Wall, and Europeans pay for the Nato.

My article on yesterday's Fed meeting is now up on Business Post page: https://www.businesspost.ie/opinion/fed-boldly-going-going-412191. 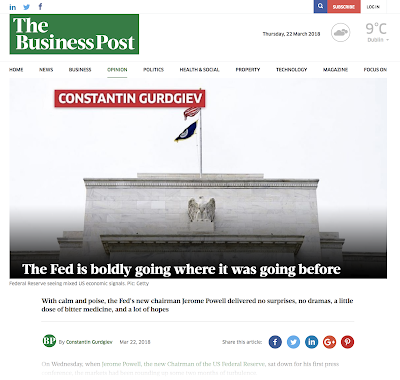 And a handy chart from Bloomberg on the relative size of the U.S. Fed's balancesheet, compared to other major Central Banks: 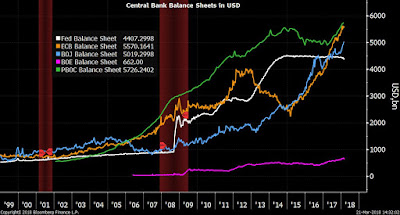 My key takeaway from the Fed meeting:

On the net, the Fed opted to continue underwriting the complete lack of fiscal discipline sweeping Washington these days. Since taking office, the current Presidential Administration has embarked on two major fiscal stimuli, involving the Tax Cuts and Jobs Act 2017 and the Government funding agreement that was delivered to the Congress late Wednesday night. The latter amounts to $1.3 trillion of new spending, $700 billion of which will flow to Pentagon. The new Bill will push projected 2018 U.S. fiscal deficit beyond $1 trillion mark, up on $665 billion last year. In January, President Trump has promised a third stimulus - the proposed $1.5 trillion infrastructure development plan - to be delivered later this year. By committing to continue slow deleveraging of the Fed’s  $4.4 trillion balance sheet, and by holding steady on small-step rates increases through 2018, Powell is de facto sustaining financing support for the swelling Federal deficits.

With calm and poise, the Fed’s new Chairman delivered no surprises, no dramas, a little dose of bitter medicine, and a lot of hopes. Unsurprisingly, dollar fell back 0.77 percent against the basket of major currencies, stocks slipped by less than 0.2 percent, and yields ended the day lower, following some volatile trading, while the yield curve flattened in the wake of the Fed’s decision. Like the FOMC projections for economic growth, the markets’ reaction to the Fed’s musings lacked conviction.
Yes, 35% statutory tax rate in the U.S. is delivering magic results... and yes, corporations do pay taxes... 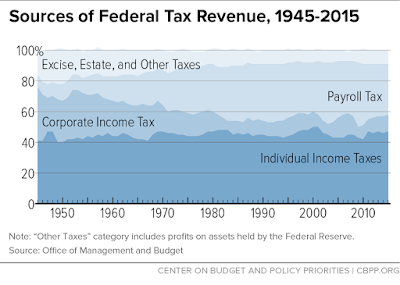