A quick top level update on the Russian economy from Bofit and Fitch Ratings.

Fitch Ratings today: “The recovery in Russia continues to gain traction. Domestic demand is responding to greater confidence in the economic policy framework, particularly as the inflation-targeting regime becomes entrenched. Activity in Turkey has bounced back rapidly from the coup attempt, with growth hitting 5% yoy in 1Q17. Momentum was supported by government incentives, including temporary fiscal measures and a jump in the Treasury commitment to the fund that backs lending to SMEs.”

Chart from BOFIT confirms the above: 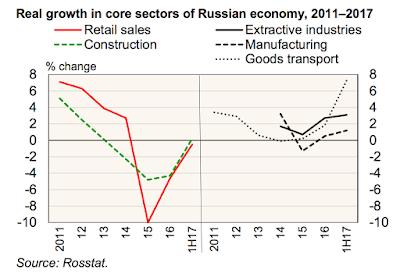 Overall, the recovery is still on track, and remains gradual at best, posing elevated risks of reversals. For example, industrial output, having previously posted gains in January-May 2017, contracted in June 2017 on a quarterly basis. Still, industrial output was up 2% in 1H 2017 y/y.  Despite the U.S. and European sanctions, and generally adverse trends in the commodities sectors, mineral extraction sector expanded 3% y/y in 1H 2017 according to BOFIT. Oil output was up 2% and gas output was up 13%. The above figures imply that higher value added manufacturing posted sub-1% y/y growth in 1H 2017.

Agricultural production was basically flat - due, in part, to poor weather conditions, rising only 0.2% y/y in 1H 2017 and unlikely to post significant growth for FY2017 as crops reports are coming in relatively weak. That said, 2015-2016 saw record crops and very strong growth in agricultural output, so barring a major decline this year, agricultural sector activity will remain robust. Food production sector was the fourth highest growth sector over 2013- 1H 2017 period across the entire Russian economy, rising cumulative 17%  in 1H 2017 compared to 1H 2013 in real (inflation-adjusted) terms.

Construction sector posted a robust 4-5 percent expansion in 1H 2017 compered to 1H 2016, a rather positive sign of improving investment.

Really good news is that household demand is now recovering. Retail sales by volume were up ca 1% y/y on a seasonally-adjusted basis and real disposable household income rose from the cycle lows to the levels last seen in May-June 2016. Bad news is that with income growth slower than retail sales and even slower than actual household consumption (which grew faster than domestic retail sales due to accelerating purchases abroad), Russian households are dipping into savings and credit to fund consumption increases.

We shall wait until July 2017 PMI figures come out over the next few days to see more current trends in the Russian economy, but overall all signs point to a moderate 1H and 3Q (ongoing) expansion in the economy, consistent with 1.2-1.3% real growth. The Economy Ministry recently reiterated its view that Russian GDP will expand at more than 2% rate in 2017. Achieving this will clearly require a large and accelerated cut in the Central Bank rate from current 9% to below 8%. Even with this, it is hard to see how above-2% growth can be achieved.

Agricultural and food production are quite significant variable in the growth equation. In 2016, Russia became number one exporter of wheat in the world, with annual production tipping 120 million tons - historical record. Bad weather conditions in 2017 mean that current expected output is estimated at around 17% below 2016 levels. Russia consumes 70 percent of its wheat output internally, so cuts to exports are likely to be on the magnitude of 1/2 or more in 2017. Domestically, food prices inflation is rising this year, threatening overall Central Bank target and putting pressure on CBR to stay out of cutting the key policy rate. Inflation rose in June to 4.4% - moderate by historical standards, but above 4% CBR target.