Let's analyze some of the news coming out from Philadelphia regarding its poorly performing tax that the city's leaders imposed upon naturally and artificially sweetened beverages distributed to be sold by retailers in the city.

The Current Challenge to the Soda Tax in Court 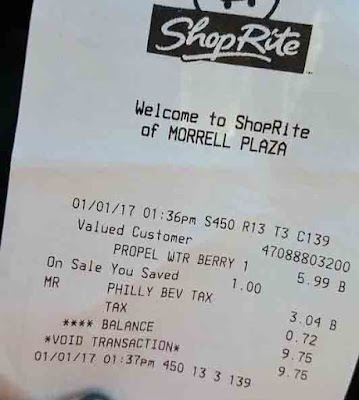 The City of Philadelphia is facing lawsuits from beverage manufacturers and distributors regarding the constitutionality of its Sweetened Beverage Tax (SBT), one of which has already reached the state of Pennsylvania's highest court. The plaintiff in the case, the American Beverage Association (ABA), has argued that the tax isn't legal under the state's constitution, which prohibits municipalities from applying local taxes on top of items that have already been taxed at the state level.

Two lower courts have ruled in favor of the City of Philadelphia already, finding that since the tax is assessed against beverage distributors rather than beverage consumers, the tax is not duplicative, which would be directly prohibited by Pennsylvania's state constitution.

The judicial findings in these two lower court decisions are largely based on the letter of the law, by which we mean that that they have not considered the real world issue of tax incidence, where the people and businesses who might be mandated by legal statutes to pay a tax are not necessarily the ones whose money is being collected by the government. Most often, they will pass as much of the cost of the tax as they can onto their customers through increasing the prices of the goods and services they might sell to them, so that in effect, their customers become the ones who are really paying the cost of the tax.

For the Philadelphia Beverage Tax (PBT), we've found examples where the city's beverage consumers are paying anywhere from two-thirds to nearly all of the the city's new soda tax, where much of the difference from one store to the next might really be attributable to the extent that the retailers or beverage manufacturers are willing to subsidize the cost of the tax to consumers through their advertising and marketing budgets to generate discounted sale prices.

Some retailers have made it clear on their receipts how much of the cost of the beverages they sell is being passed through to their customers (Image Credit: ZeroHedge). As we're about to see, the higher costs being passed on to them are, particularly for small retailers, having a negative effect on their businesses.

A Family-Owned Bakery Goes Under

In Philadelphia, the Orlando family has owned and operated a bakery since 1948 in the Overbrook neighborhood at the intersection of Lebanon Ave. and Kenmore Rd. Sunday, 6 August 2017 was its last day in business, and the last day of work for its five employees.

Over the years, it survived every economic challenge that came its way, but one.

"The soda tax was the kill shot," said Anthony Voci Jr., a grandson of Christopher Columbus "Chick" Orlando and now a lawyer in Philadelphia.

Chick Orlando started in the baking business with his father in the 1930s with a shop in West Philadelphia, and ran several shops in the city and Delaware County until he was killed by a drunken driver while making a delivery shortly before Christmas 1971. His sons David and Robert took over Orlando's.

The business' last owner, Tyler Orlando, 32, also a grandson, said business was off 60 percent since the soda tax went into effect Jan. 1 – a difficult situation for a low-margin business. Orlando said his customers simply crossed the nearby city line to avoid the higher prices for juices, milk and other sweetened drinks typically purchased with doughnuts and pastries. "I'd see my customers in there," he said. "I don't blame them."

The actions of consumers to avoid the burden imposed by the true tax incidence of Philadelphia's soda tax is not surprising. It is human nature to want to get the most for one's money, so we should expect that people will change their long-established shopping patterns to avoid having to pay an outlandish increase in prices, when they can easily buy exactly the same product just a little way down the road for a lot less.

Nor is it surprising that Philadelphia is experiencing the rise of an organized black market that is thriving on exploiting the differences in the prices for soft drinks in Philadelphia and its surrounding suburbs.

A Boom in Bootlegging

When we've talked about bootlegging in the past, it has typically been in the context of cigarette and other kinds of so-called "sin taxes" that are supposed to produce positive benefits by reducing consumption. But that only matters to the extent that consumption is actually reduced, where the business of bootlegging both allows the "undesired" consumption to remain higher than it might otherwise be while it also damages the expected tax collections that would be realized if the sin tax was achieving its desired results.

On 23 June 2017, Danny Grace, the Secretary-Treasurer of the Teamsters Local 830 union, testified before a Pennsylvania Senate committee on the direct negative impact of Philadelphia's soda tax on the members of the union, where he counts 155 lost jobs (10 more than we tallied back in May 2017). In doing so, he also shown a light on a negative externality being experienced by members of the union because of the increased profits for bootleggers whose profits are made possible because of the tax and their ability to avoid paying it, and also the impact to the city's poorest residents because of the soda tax' highly regressive nature (emphasis ours).

The definition of a regressive tax is one that disproportionately affects the very people who can least afford to pay it. The city's poor don't have the financial means to absorb a tax that has more than doubled the costs of their favorite sodas, juices, iced teas, sports drinks, flavored milks and countless other beverages. The tax has been applied to virtually every beverage sold in the city. The working poor also don’t have the ability to drive to the nearby suburbs or South Jersey to buy their beverages and avoid the outrageous tax, like many other city residents are doing. This situation – which the Teamsters predicted – has forced many low income Philadelphians to forego sweetened drinks altogether or purchase them through the many illegal black market operations that have sprung up across the city. We have seen evidence of people purchasing hundreds of cases of sweetened drinks in nearby suburban areas such as Upper Darby in Delaware County, loading them in unmarked vans, and driving them into Philadelphia to be sold out of nondescript warehouses or right out of the vans.

The Kenney administration's stated assumption that lost sweetened beverage sales would simply be filled in with increased sales of water and other non-sweetened drinks has been proven false. Consumers don't behave that way. Consumers can make the choice today to abandon sweetened beverages for water and other non-sweetened drinks, but they haven't done so nor will they.

As a direct result of the beverage tax, there has been a huge drop-off in sales of sweetened beverages in the city, just as we predicted. The damage the tax has already done to our union has been significant. As of this moment, 155 of our union brothers and sisters have been laid-off - 80 members at Pepsi, 40 at Coke and 35 at Canada Dry. And these are family-sustaining jobs we’re talking about.

That's more practical insight into the nature of externalities than one may ever find in the lecture halls of today's universities. We will point out that when Grace refers to a "huge drop-off in sales of sweetened beverages in the city", he's referring to the sales of sweetened beverages to which Philadelphia's beverage tax has been applied, where bootlegging operations and the actions of Philadelphia's consumers to shift their purchases of these products outside of the city's limits to legally avoid having to pay for the highly taxed products are sustaining a far higher level of consumption within the city than the amount of taxed sales would suggest.