S&P new post about the risks poised by North Korea is a neat summary of key actions and players involved (see the full note: https://marketintelligence.spglobal.com/blog/global-credit-risk-spikes-as-key-apac-countries-respond-to-the-north-korean-threat).

And it is very interesting to those of us, who study the links between geopolitical risks and financial markets.

Two pieces of evidence are presented in the S&P note worth pondering: first, the rising frequency of the North Korea threat signals:

The above shows that starting with 2016, acceleration in the North Korea threat signals has been posing a departure from the previous trend. Structurally, this suggests that we are entering a new regime in terms of potential market spillovers from North Korean risks to global financial markets.

Next, some evidence on changes in specific shares valuations timed close to the North Korean threat signals:

The evidence above suggests that, in line with our research findings in other instances, the uncertainty about North Korean threat evolution is feeding into the valuations of defence stocks. And that this effect is still ambiguous. Which is in line with our findings on the links between actual conflicts and defence stocks valuations revealed in my paper with Mulhair, Andrew, "Performance Analysis of U.S. Defense Stocks in Relation to Federal Budgets and Military Conflicts in the Post-Cold War Era" (April 2017). Available at SSRN: https://ssrn.com/abstract=2975368. Furthermore, the nature of North Korean policy-induced uncertainty is consistent with our findings relating to terrorism spillovers to financial markets as revealed in my paper with Corbet, Shaen and Meegan, Andrew, "Long-Term Stock Market Volatility and the Influence of Terrorist Attacks in Europe" (August 2017). Available at SSRN: https://ssrn.com/abstract=3033951. Note, the latter paper is now forthcoming in the Quarterly Review of Economics and Finance.

While explicit testing of spillovers from North Korean uncertainty to global financial markets is yet to be firmly established in empirical literature, it is worth noting that the indirect evidence (based on data similar to S&P blog post) suggests that North Korean threat is likely to have a significant VUCA-consistent effect on the markets.

The first paper is "Long-Term Stock Market Volatility and the Influence of Terrorist Attacks in Europe", available here: https://papers.ssrn.com/sol3/papers.cfm?abstract_id=3033951

This paper examines the influence of domestic and international terrorist attacks on the volatility of domestic European stock markets. In the past decade, terrorism fears remained relatively subdued as groups such as Euskadi Ta Askatasuna (ETA) and the Irish Republican Army (IRA) relinquished their arms. However, Europe now faces renewed fear and elevated threats in the form of Middle Eastern and religious extremism sourced in the growth of the Islamic State of Iraq and Levant (ISIL), who remain firmly focused on maximising casualty and collateral damage utilising minimal resources. Our results indicate that acts of domestic terrorism significantly increase domestic stock market volatility, however international acts of terrorism within Europe does not present significant stock market volatility in Ireland and Spain. Secondly, bombings and explosions within Europe present evidence of stock market volatility across all exchanges, whereas infrastructure attacks, hijackings and hostage events do not generate widespread volatility effects. Finally, the growth of ISIL-inspired terror since 2011 is found to be directly influencing stock market volatility in France, Germany, Greece, Italy and the UK. 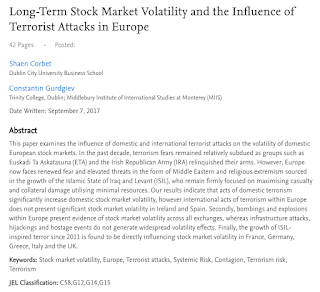