Here is an interesting piece of evidence on the nature of real estate bubbles and financial crises these create. One of the largest fallouts from property-driven financial crises in modern European history relates to the early 1991-1992 blowout in Sweden that saw massive collapse in property prices triggering a systemic contagion to financial institutions, The resolution process and the recovery that followed were long. Just about 10 years - the time it took the real property prices to regain their pre-crisis peak. 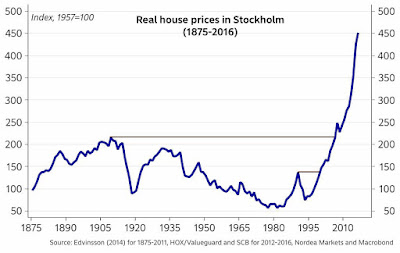 But the bigger story is a hundred-years-long bust to recovery cycle that took Stockholm's property prices from 1910 peak until 2007.

What is, however, most telling is the fact that Stockholm's markets show conclusively and without any doubt that all the lessons supposedly 'learned' in the past crises have been un-learned in the aftermath of the 2007-2008 Global Financial Bust. Despite the painful recovery from the 1991-1992, and despite huge efforts put by the successive Governments into highlighting regulatory and market structure reforms that followed it, Swedish property markets have gone into another, this time completely unprecedented in the country history, craze.

Stockholm is a city that has been so reformed post the 1990s, it makes more sense to live in a hotel, at least in some cases (http://www.businessinsider.com/stockholm-rents-are-so-high-its-often-cheaper-to-live-in-a-hotel-2017-8). It is, of course, worth remembering that Stockholm is the equivalent of 'warm dream' for all rent control enthusiasts worldwide and for all 'moar regulation will save us from ourselves' crowds.