A top-level, comprehensive report compiled by the Lancet Commission details estimates of economic and human costs of pollution worldwide. The full report is available here: http://www.thelancet.com/commissions/pollution-and-health.

Before I summarise some of its main findings, it is worth noting that such an undertaking is, by definition, a difficult one and the one that involves a lot of assumptions, models, estimates and uncertainty around its findings. There will be debates and there will be those who disagree with the report findings. However, two things are clear:

Here are the key findings of the report: 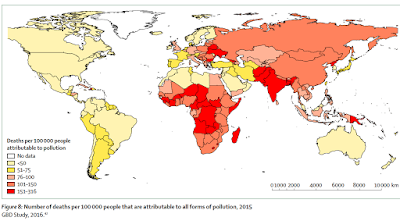 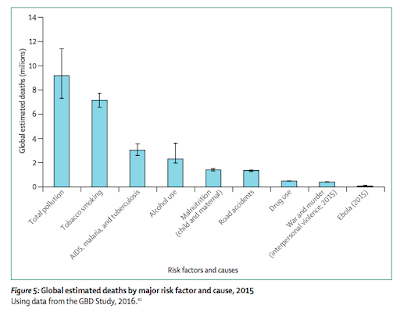 Quoting from the report:
"Pollution is the largest environmental cause of disease and premature death in the world today. Diseases caused by pollution were responsible for an estimated 9 million premature deaths in 2015—16% of all deaths worldwide — three times more deaths than from AIDS, tuberculosis, and malaria combined and 15 times more than from all wars and other forms of violence. In the most severely affected countries, pollution-related disease is responsible for more than one death in four.
Pollution disproportionately kills the poor and the vulnerable. Nearly 92% of pollution-related deaths occur in low-income and middle-income countries and, in countries at every income level, disease caused by pollution is most prevalent among minorities and the marginalised. Children are at high risk of pollution-related disease and even extremely low-dose exposures to pollutants during windows of vulnerability in utero and in early infancy can result in disease, disability, and death in childhood and across their lifespan."
This is a very important report, worth reading.