This has prompted many analysts and academics to define the current recovery as being, effectively, trade-less growth (see, for example https://www.bis.org/review/r161125c.pdf).

This is plainly false. In fact, growth in global trade volumes has outpaced growth in real GDP (based on market exchange rates) in every year since 2010, except for 2016. As the chart below clearly shows, the difference between the rate of trade volumes growth and the rate of real GDP growth remained positive in average terms: 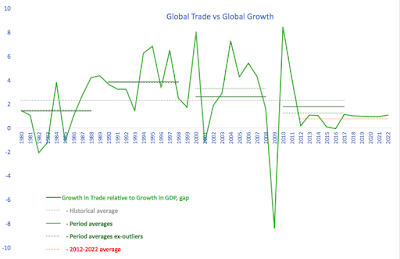 Instead, what really happened to the two series that both real GDP growth and trade volumes growth have fallen significantly since 2011. Average growth in trade over 1980-2017 period stood 2.31 percentage points above growth in real GDP. The 2010-2017 period average gap between the two is 1.78 percentage points, the second lowest decade average after 1.48 percentage points gap recorded in the 1980s. However, these comparatives are somewhat distorted by influential outliers - years when post-recessions recoveries triggered significantly higher spikes in growth in both series, and years when trade recessions were substantially sharper than GDP growth slowdowns. Omitting these periods from decades averages, as the chart above illustrates, makes the current recovery (2010-2017 period) look much much worse than any previous decade on the record (green dashed lines).

Still, the above presents no evidence that trade weaknesses contrasted GDP growth trends. And there is no such evidence when we look at decades-based correlations between trade growth rates and GDP growth rates: 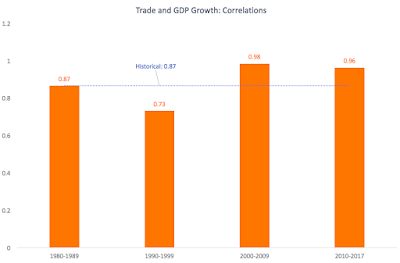 So what has been happening, thus? 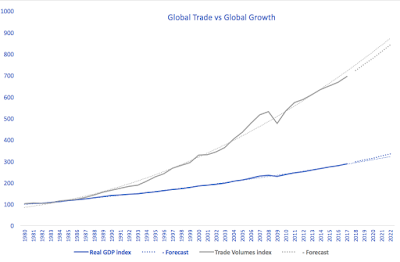 As the chart above clearly shows, there are significant differences in trends between the two series. Using indexing approach, setting 1979 = 100, we can compute index of real GDP activity and trade volumes activity based on annual rates of growth. The two series exhibit a diverging pattern, with divergence starting around the end of the 1980s, accelerating rapidly during 1993-2008 period and then de-accelerating since the onset of the post-GFC recovery. Notably, however, this de-acceleration simply slowed the expansion of the gap between the two series, and it did not reverse it or close it.

In other words, past periods of exploding trade volumes growth are unlikely to reflect sustainable trends in the real economy. These were the periods of substantial misalignment between trade and growth much more than the current period of slower trade growth suggests. In other words, something is happening to both trade and growth, and that, most likely, is what we call a structural slowdown or a secular stagnation.