An interesting new working Paper from the BofE, titled “Eight centuries of the risk-free rate: bond market reversals from the Venetians to the ‘VaR shock’” (Bank of England, Staff Working Paper No. 686, October 2017) by Paul Schmelzing looks at new data for “the annual risk-free rate in both nominal  nd real terms going back to the 13th century.”

Specifically, the author shows “that the global risk-free rate in July 2016 reached its lowest nominal level ever recorded. The current bond bull market in US Treasuries which originated in 1981 is currently the third longest on record, and the second most intense.” 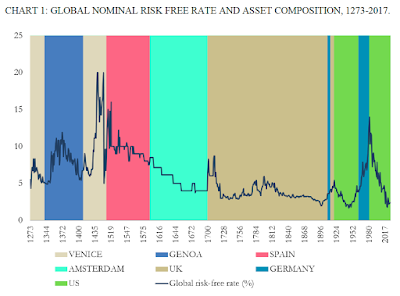 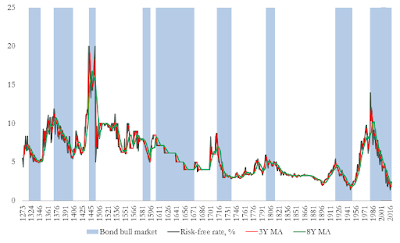 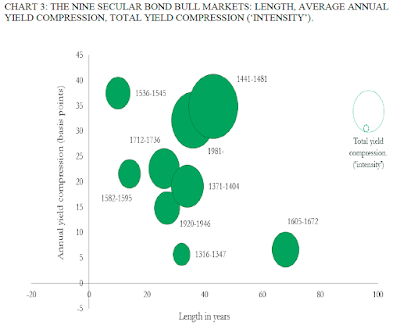 While the rest of the paper goes through three specific case studies of bull markets corrections, it is the first section - the one based on historical long-term data series - that poses the starkest evidence of just how exceptional (and thus risk-loaded) the current markets environment is. Looking at historic averages, and potential for historical mean reversion for yields, the current yield on U.S. 10 year paper will have to double, effectively increasing long-term risk exposure to widening fiscal deficits by the tune of 2.5-2.75 percent of GDP. The cost of carrying this level of indebtedness, when yields run 1.5-1.7 times the upper envelope of the potential rate of economic growth is a function of simple arithmetic. Currently, this arithmetic suggests that the U.S. will either have to figure out how to live with above 5% annual deficits and ballooning debt, or how to live within its own means.