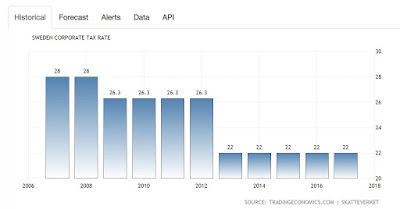 h/t for the chart to

Tax optimization, folks, just went mainstream in Europe and the U.S. Which is a good thing for transparency (reducing the disparity between the effective rates and the headline rates). But a bad news for personal income taxes. To offset the declines in corporate tax revenues that BEPS changes will inevitably engender, Governments from Sweden to Italy, from Canada to the U.S. will have to either cut spending or increase personal income tax rates. No medals for guessing what they will opt for.