My article for The Currency on the effects of the U.S. fiscal profligacy on global debt and money markets is out: https://www.thecurrency.news/articles/7371/the-us-deficit-has-topped-1-trillion-and-investors-should-be-worried.

"As the Trump administration continues along the path of deficits-financed economic expansion, the question that investors must start asking is at what point will debt supply start exceeding debt demand, even with the Fed continuing to throw more cash on the fiscal policies bonfire?"

"In the seven years prior to the crisis of 2008-2012, US economic growth outpaced US budget deficits by a cumulative of $1.56 trillion. This period of time covers two major wars and associated war time spending increases, as well as the beginnings of the property markets and banking crises in 2007.

"Over the last seven years since the end of the crisis, US economic growth lagged, on a cumulated basis, fiscal deficits by $928 billion, despite much smaller overseas military commitments and a substantially improved employment outlook.

"These comparatives are even more stark if we are to look at the last three years of the Obama Administration set against the first three years of the Trump Presidency. During the 2014-2016 period, under President Barack Obama, US deficits exceeded increases in the country’s GDP by a cumulative amount of $226 billion. Over the 2017-2019 period, under  Trump’s tenure in the White House, the same gap more than doubled to $525 billion.

"No matter how one spins the numbers, two things are now painfully clear for investors. One: irrespective of the stock market valuations metrics one chooses to consider, the most recent bull cycle in US equities has nothing to do with the US corporate sector being the main engine of the economic growth. Two: the official economic figures mask a dramatic shift in the US economy’s reliance on public sector deficits since the end of the crisis, and the corresponding decline in the importance of the private sector activity."

My article, summing up the key lessons from the Global Financial Crisis that investors should review before the next crisis hits is now available via Manning Financial newsletter: http://issuu.com/publicationire/docs/mf_winter_2017?e=16572344/55685136. 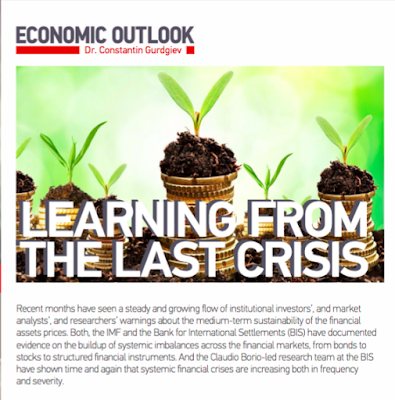