One of the key signals of a systemic mispricing of financial assets is concentration risk. I wrote about this in a number of posts on the blog, so no need repeating the obvious. Here is the latest fragment of evidence suggesting that we - the global financial markets and their investors - are at or near the top of froth when it comes to 'irrational exuberance':  http://www.zerohedge.com/news/2017-11-26/david-stockman-derides-delirious-dozen-2017. 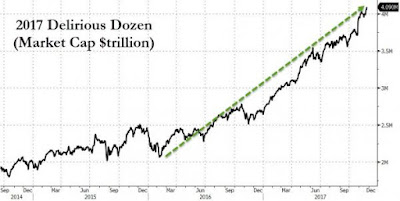 What the above valuations imply?

There is, quite clearly and transparently, an eyes wide shut moment for the markets. Greenspan might have called this the 'irrational exuberance', while your friendly sell-side broker will undoubtedly call it 'time to buy into the market' moment. But you have to have guts of steel and brain the size of a pea to not spot the trouble ahead with the current markets valuations.