An interesting chart from Bloomberg on intra-EU productivity divisions: https://www.bloomberg.com/news/articles/2017-11-29/eu-s-productivity-split 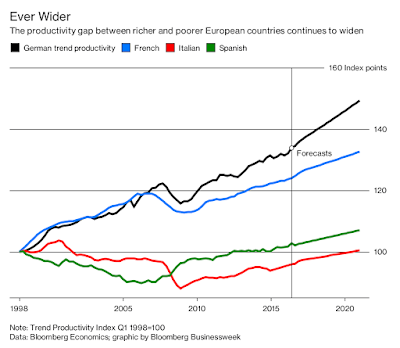 The key here is not the current spot observation or the trend forecast forward, but the dynamics from 2008 on. Since the GFC, productivity divergence within the EU has been literally dramatic. And the two interesting markers here are:

A more involved view of the continued divergence in the Euro area is here: https://media.arbeiterkammer.at/wien/PDF/varueckblicke/R.Fulterer_I.Lungu_Yec_2017.pdf.