Having covered the state of Earth's economy yesterday, we have a unique opportunity to extend our planetary scale analysis to Mars, whose economy is starting to register signs of life after what many scientists believe is a 600 million year recession.

There is, after all, now signs of activity on the Martian surface. The following footage of some of that activity was recorded on 18 February 2021:

With the arrival of NASA's Perseverance rover, we estimate Mars' GDP to now be greater than $0, which is where Mars' economy had been stuck since the Mars Opportunity rover ceased operation in 2019, and which has been Mars' average GDP for millennia.

Although the Perseverance mission itself cost more than $2.4 billion, which does not include an additional $300 million for landing and operating a rover on the surface of Mars. Nearly all of these costs are properly counted toward Earth's GDP however, where nearly all of the mission's activity has occurred to date.

With an active mission on its surface, Mars' GDP is no longer at $0, but is now greater than $0.

Economic development plans are in the works for Mars, which may become the first planetary economy to run entirely on cryptocurrency.

The Perseverance rover will collect samples that will someday be exported to Earth, making the mission the one of the first to begin developing interplanetary trade within the solar system.

How much do you suppose Mars' first produced exports will be worth?

"All happy families are alike; each unhappy family is unhappy in its own way."

While Tolstoy's insight into human nature applies specifically to families, it may also describe the state of many of the world's cities and the division between areas that have been formally developed, where people have easy access to obtaining life's necessities, and areas that have been informally developed, which are often defined by their lack the same kind of access.

At least, that's one takeaway from a new study by Christa Brelsford, Taylor Martin, Joe Hand and Luís M. A. Bettencourt, who found that when they applied the mathematics of topology to the layout of developed neighborhoods and undeveloped slums found in many of today's cities around the world.

Topology is the branch of mathematics that studies the properties of an object that are preserved when it is morphed into very different shapes without either tearing the object or fusing portions of the object back into itself. Think of a ball of clay, which could be shaped into a cube, a bowl or even into a leafy tree, where a wide variety of complex geometries can be grouped into families described by one simple base shape because they share certain unique mathematical characteristics. Because they share those characteristics, it becomes possible to compare very different or complex geometries and arrive at valid conclusions that would then apply to all potential members of the same topological family. Here's how they authors applied the math of topology to the study of urban areas:

The physical volume of all paths, streets, and roads in a city is a connected two-dimensional surface: Any point on this surface can be reached from any other point on the same surface. This surface ends where buildings begin and at external city boundaries. Thus, the urban access network surface, U, of any city has a number of internal boundaries, b, one for each city block and another for city limits. Mathematically, such an access system is topologically equivalent to a disk with b punctures or "holes" (or a sphere with b + 1 disks removed). In this way, all urban access systems with the same number b of city blocks (i) are topologically equivalent and (ii) share an invariant number, the Euler characteristic χ(U) = 1 - b, which is independent of geometry.

The authors found they could identify similarly developed but geometrically and geographically distinct regions as mid-town Manhattan, the Las Vegas suburb of Summerlin, Nevada, and the Dharavi neighborhood of Mumbai, India, and directly link them so long as they shared the same number of blocks, as shown in the following video.

They found that all these formally developed areas were all similar in their characteristics to one another, but the undeveloped areas either within or on the periphery of these cities were quite different from these "happy" communities, where "happy" means "having adequate access to roads, water and sanitation services". Moreover, their approach in mathematically describing slum areas without such similar access to life's necessities may lead to their effective development, with minimal cost and disruption to lives of the one billion people who live in these communities around the world today.

Here's how the authors foresee their new topographical tools being used to address the problem of bringing necessities into today's impoverished urban areas.

Over the next couple of decades, it is estimated that infrastructure investments will need to exceed $1 trillion/year in developing nations to meet international development goals, with the majority in poor areas of developing cities. Slum upgrading is a key strategy for achieving these goals, with infrastructure costs accounting for about 50% of the total. Efficient reblocking is an essential part of these transformations because the most important determinant of the cost of building or upgrading urban infrastructure is the existence and layout of the access network. By identifying and formalizing the essence of the spatial transformations necessary for neighborhood evolution, the methods proposed here increase the benefit-cost ratio for infrastructure provision [currently ~3 for water and sanitation] and markedly accelerate — from months to minutes — most technical aspects of creating viable reblocking plans. This enables nontechnical stakeholders to focus their time and effort on the socioeconomic tradeoffs of alternative layouts [leading to savings of up to 30%] and creates precise digital maps that can formalize land uses and property records, facilitating political and civic coordination and further local development.

In other words, the problem of how to transform impoverished areas into developed ones will stop being a technical challenge and will instead becomes purely a political problem. As for its potential, imagine unlocking what Hernando de Soto described as the problem of "dead capital" that would come from bringing formal property rights to these undeveloped urban areas and the one billion people who live in them.

How fast is the world's economy growing? 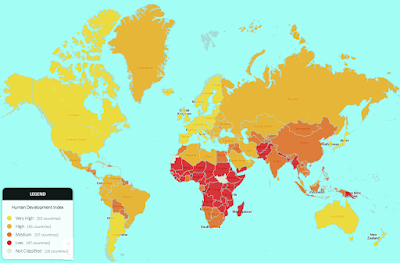 That's an easy question to ask, but not an easy question to answer. Much of the economic data used to answer that question that we take for granted in what's called the "developed world" is often either absent or of very poor quality when you get to the nations of the "developing world". Worse, the official economic statistics produced by the economic powerhouses of the so-called developing world, such as China and India, are considered to be highly unreliable, which is especially problematic when you consider that these two nations by themselves account for just shy of 36% of the world's population.

That's a lot of people for whom simply adding up national GDP numbers won't produce anything close to an accurate answer in calculating the growth of the world's economy.

Two years ago, we launched a project to develop a global economic indicator, where we looked to the measurement of the concentration of carbon dioxide (CO2) in the Earth's atmosphere as a tool to get better insights into the relative health of the Earth's economy. Here, because most of the carbon dioxide that accumulates in the Earth's atmosphere gets there specifically because of productive human activities, such as the burning of carbon-rich fossil fuels to produce energy, changes in the concentration of CO2 should be correlated with those productive activities.

The following chart shows the level at which those measurements have been recorded at the remote Mauna Loa Observatory in Hawaii, from March 1958 through November 2017. 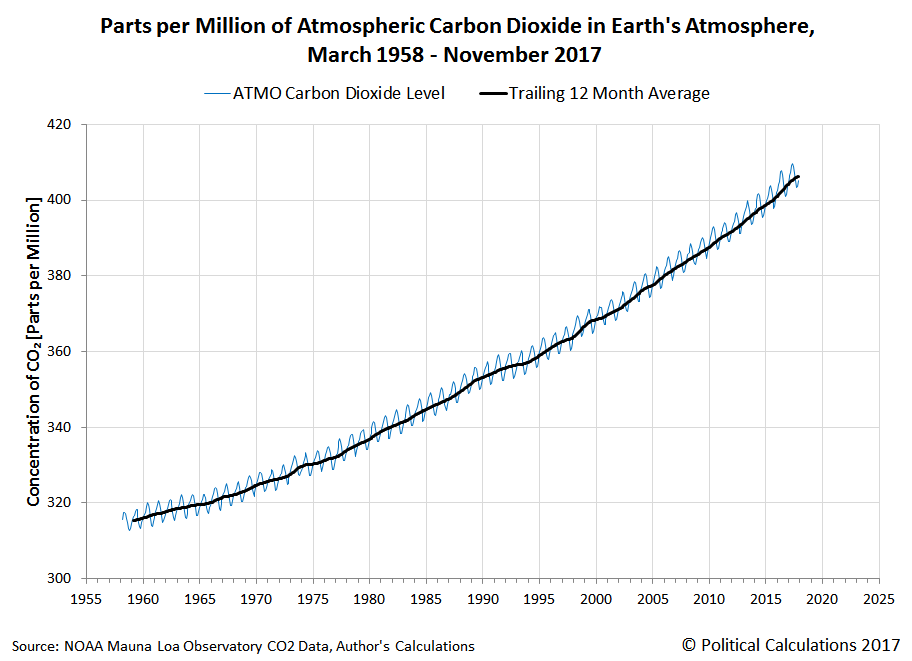 What we see first is that the level of CO2 in the Earth's atmosphere follows a seasonal pattern, which is smoothed out using a trailing year average. The trailing year average shows a generally rising trend over time, although one where the amount of CO2 in the air sometimes accelerates and sometimes slows, which should correspond to changes in the world's economic growth rate.

"Should" being the operative word, because not all the carbon dioxide that finds its way into the Earth's atmosphere gets there because of human activities. Periodically, large scale natural phenomena are responsible for large quantities of carbon dioxide entering into the air, which makes using atmospheric CO2 as an economic indicator somewhat problematic. For example, during strong El Niño events, lots of additional CO2 that isn't generated through productive human activity gets into the Earth's atmosphere, where the challenge lies in isolating that contribution of atmospheric CO2 from the portion generated from human economic activities after it has been thoroughly mixed in the air.

We've been working on that problem behind the scenes over the last couple of months. Here's how we cracked it.

We started by focusing on the annual seasonal cycle for atmospheric carbon dioxide. The following chart takes the data shown in our previous chart and shows it month by month, where each line in the chart corresponds to an individual year. 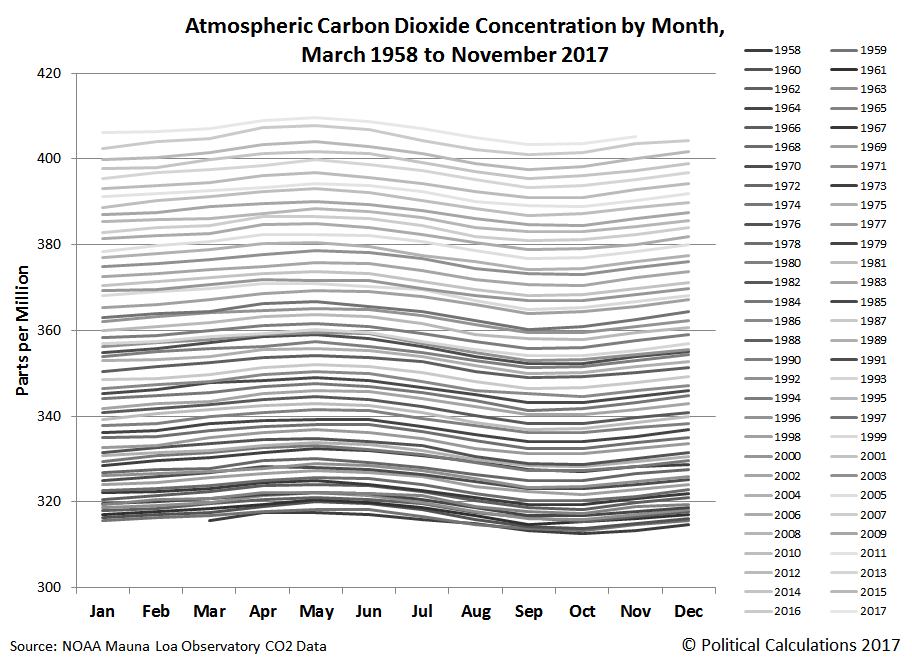 Our next step was to index each month's CO2 value with respect to the level measured in the preceding October, which we expressed as a percentage, where the value for October in each year would be set to 100%. Our next chart shows the result of that math for all the data from October 1958 through November 2017. 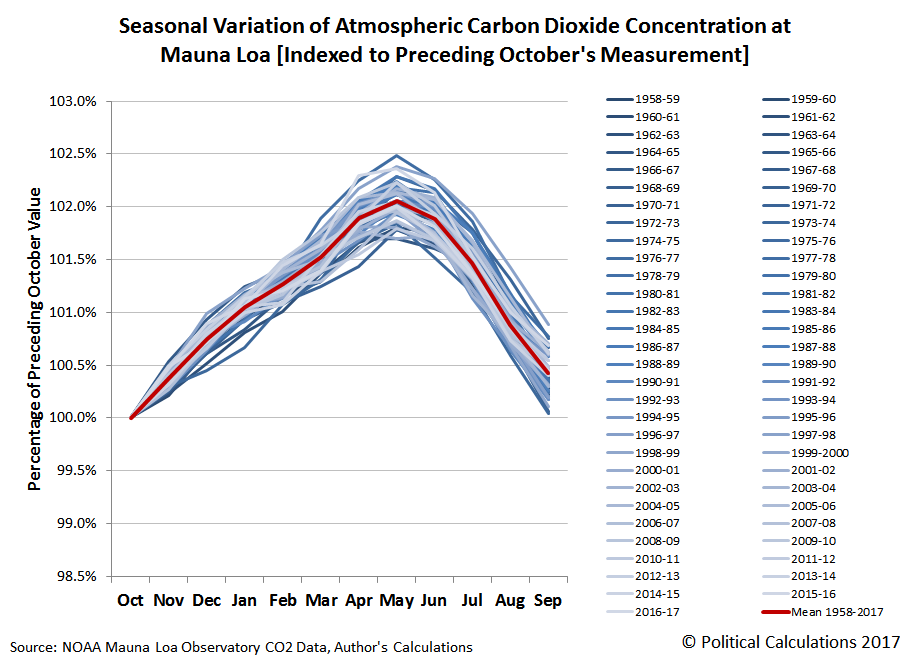 We next focused on those years where we know that lots of additional carbon dioxide enters into the Earth's atmosphere as a consequence of natural phenomena like strong El Niño events. Our next chart filters out all years but those that contained the five strongest El Niño events on record, where we've marked the two most recent, 1997-1998 and 2015-2016, which also happen to be the strongest on record. 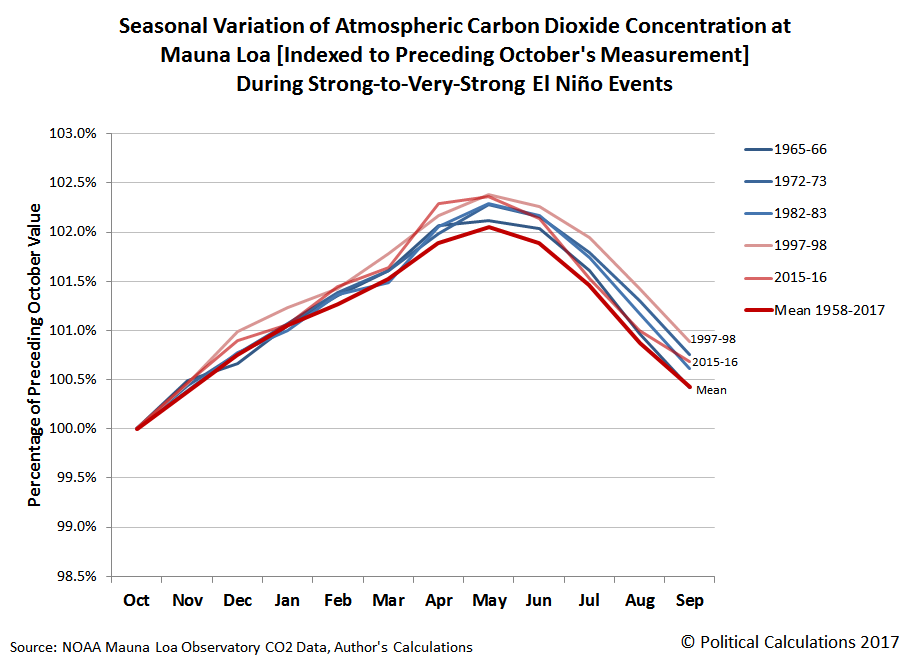 We may be able to use the difference between in the mean seasonal variation and the actual seasonal variation during El Niño to extract their surplus contribution of CO2 into the Earth's atmosphere, which should just leave behind the CO2 contributed through productive economic activity around the world. In the following animated chart, we've illustrated how that would work by showing the unadjusted values of the trailing twelve month average of the year over year change of atmospheric carbon dioxide with respect to the adjusted values for the 1997-98 and 2015-16 El Niño events, all against the backdrop of some of the world's more significant economic events from January 1960 through November 2017.

We still have some refining work to do for our methodology, where we also need to isolate the contribution of older El Niño events to fully update the chart. Never-the-less, for what we've done so far, the results appear to be promising, where in the case of the 2015-16 El Niño event, it looks like we're reasonably close to the best estimates that we've seen for accounting for the full amount of surplus CO2 that was not generated through productive activity.

And that is how we're marking our anniversary this year, with the advancement of a surprisingly viable global economic indicator!

Our anniversary posts typically represent the biggest ideas and celebration of the original work we develop here each year. Here are our landmark posts from previous years:

We marked our 2013 anniversary in three parts, since we were telling a story too big to be told in a single blog post! Here they are: