No, it is not Russia Today, nor Sputnik, nor some other 'foreign agent' reporting this, but the U.S. own Newsweek. The mass media, mainstream news publication headlined its recent report with this: ALABAMA HAS THE WORST POVERTY IN THE DEVELOPED WORLD, U.N. OFFICIAL SAYS (http://www.newsweek.com/alabama-un-poverty-environmental-racism-743601).

You know things are pretty much going South when the UN sends in a "Special Rapporteur on extreme poverty and human rights" to look into the, that is right, poverty and human rights record of the world's leading democracy, the Number One, the shining light on the ever-dark horizon, that marks the way for the destitute and the oppressed... ah, you know the leitmotif.

It would be a bit of a 'right, UN, say no more' if it weren't for the hard cold facts mentioned in the Newsweek article, the open sewers, the 2017 hookworm outbreak, the "nearly 41 million people in the U.S. live in poverty. That's second-highest rate of poverty among rich countries" reported by another, non-RT/non-Sputnik agency, the U.S. Government's own Census Bureau. Were it not for the fact that the UN investigator is a U.S. law professor (well, he might be a foreign agent too, who knows).

It would be, may be, discountable, were it not for a 2016 Allianz Global Wealth Report (yes, the non-commie insurance company) that shows the U.S. Gini coefficient (a measure of inequality: the higher the Gini coefficient, the greater is inequality) at 0.81 - the highest in the world and also provides this snapshot of the wealth held by the fabled and famed U.S. engine for social advancement - the middle class: 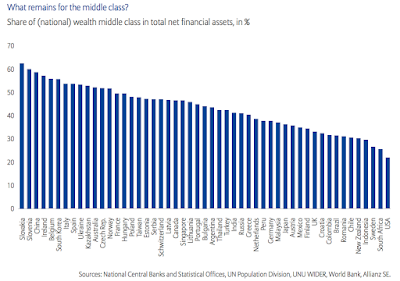 The above, of course, shows that the U.S. middle class has lowest share of national wealth in the world. Source: https://www.allianz.com/v_1474281539000/media/economic_research/publications/specials/en/AGWR2016e.pdf.
Here is the problem, folks. If the U.S. mass media ever gets its act together, and instead of chasing the ghosts of the Russian bogeys starts paying real attention to what is going on in American homes and backyards, things might get seriously testing. But, for now, the good thing is, there's always a Russian enemy hiding somewhere in the bushes. Although, most likely not in the same bushes that sit atop the Alabama waste collection ditches.