Academy of Sciences publishes relatively regular polls of public opinion that look into voters' preferences, including preferences for either "significant changes" in policy course in Russia or "stability" of the present course.

Here is the latest data: 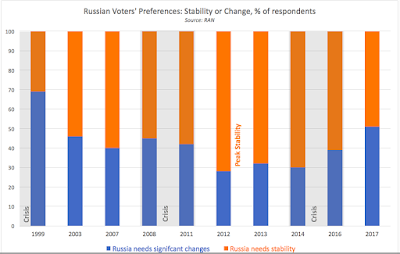 Some 'Russia analysts' in the Western media have been quick to interpret these numbers as a sign of rising anti-Putin sentiment. Things are more subtle than that.

There is, indeed, a rather remarkable shift in public preferences in favor of "significant changes". Which can be attributed to the younger demographic who are predominantly supportive of reforms over their preferences for "stability". This is good. However, we do not know which changes the voters would prefer. Another potential driver for this shift is the ongoing weak recovery in the Russian economy from the 2014-2016 crisis - a recovery that fades to the background voters' previous concerns with the Russian State's geopolitical standing in the international arena (key pillar of Putin's third presidency) and the movement to the forefront of economic concerns (key pillar of Medvedev's interim presidency and, so far, an apparent area of significant interest for Putin looking forward to his fourth term).

These gel well with other public opinion data.

Here is Pew data from earlier 2017 showing that Russian voters nascent sentiment in favor of reforms may not be incongruent with their simultaneously continued support for Putin's leadership: 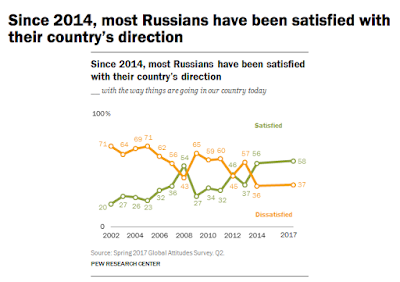 When one looks at the same polls data on core areas of domestic policy that the Russians feel more concerned about, these are: corruption (#1 priority), economy (#2 priority) and civil society (#3 priority). In other words, more liberal issues are ranked toward lower priority than other reforms (economy and corruption, which are both seen by the majority of the Russians as the domain of State power, not liberal order reforms). Civil society is an outlier to this. And an interesting one. Perhaps, indicative of the aforementioned demographics shift. But, perhaps, also indicative of the dire lack of alternatives to Putin-centric political spectrum in Russia. Again, whether the voters actually see Putin as a barrier to achieving these reforms is the key unknown. 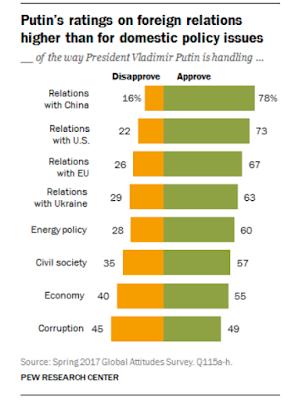 Worse, not a single one area of domestic policies has plurality disapproval rating.

Somewhat confusing, Putin's personal approval ratings - for specific areas of policy - have been deteriorating over time: 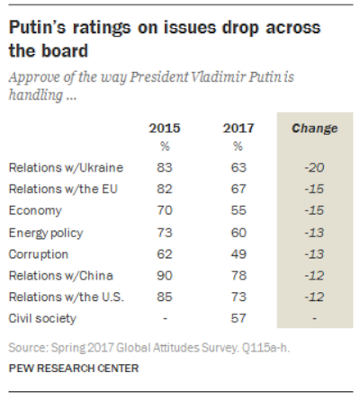 This is significant, because traditionally, Russians view Presidential office as distinct from the Government (the 'good Tzar, bad Boyars' heuristic) and the tendency to view domestic objectives as key priorities or targets for disapproval would normally be reflected in falling support for the Government, not the President. This time around, things appear to be different: Russian voters may not be blaming Putin's Presidency outright, but their confidence in the President's ability to manage the policy areas of their key concerns is deteriorating.

The 'Putin call' - past bet on forward growth to sustain power centralization - is now out of money: 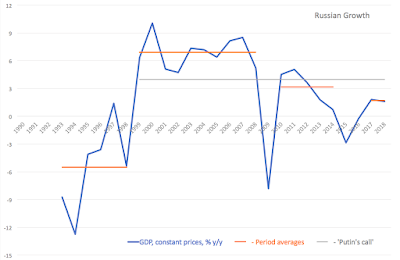 Weakest points are: corruption and economy. And these are the toughest nuts to crack for Putin's regime because it rests strong Federalization drive of 1999-present on the foundations of balancing the interests of the rent-seekers surrounding it (aka, on corruption around it, a trade-off between loyalty to the Federal State and the President, in return for access to wealth and the ability to offshore this wealth to the likes of London, a world's capital for grey and black Russian money).  Ironically, Western sanctions and broader policies toward Russia are actively constraining the scope and the feasibility of all reforms - be it reforms of the economy or civil society, anti-corruption measures or political liberalization.

Note: an interesting read on the changes in the Kremlin-backing 'opposition' is also afoot, as exemplified by the new leadership emerging within the Russian Communist Party (read this well-researched and unbiased view, a rarity for WaPo, via David Filipov: https://t.co/8OfqCZzdOY).

Taken together, the above suggests that Putin needs some quick wins on the hardest-to-tackle issues: corruption and economy, if he were to address the pivot in voters' preferences for change. The 'if' bit in this statement reflects severe uncertainty and some ambiguity. But assuming Putin does opt to react to changes in the public opinion, we can expect two policy-related moves in months ahead:

What we are not likely to see, in the short term, is unfortunately what is needed as much as the above reforms: changes in legal and enforcement regimes. Poor legal enforcement and outdated, politicized and often corrupt judicial system are stifling entrepreneurship, enterprise scaling, international and domestic investment and, equally importantly, development of the civil society. It also weakens the Federal State by presenting a bargain in which local loyalty to Moscow is secured by allocating local authorities power to shadow justice systems. This bargain undermines voters' trust and reduces efficiency of resources flowing across regions and from Moscow.

As a number of more astute observers, e.g. Leonid Bershidsky (@Bershidsky) and David Filipov (@davidfilipov) have implied/stated in the past, promising reforms after nearly two decades in power will be a hard sell proposition for Putin. Which means Programs alone won't cut it. Kremlin will need to deliver and deliver fast, in order to break away from the 'Putin 3' track: