An interesting recent paper from ECB on the link between monetary policy (interest rates) and secular stagnation. Ferrero, Giuseppe and Gross, Marco and Neri, Stefano, ECB Working Paper, titled "On Secular Stagnation and Low Interest Rates: Demography Matters" (July 26, 2017, ECB WP No. 2088: https://ssrn.com/abstract=3009653) argues that adverse demographic developments can account for a long-run (since the mid-1980s) trend decline in real and nominal interest rates. In particular,  demographic factors linked to secular stagnation, have "exerted downward pressures on real short- and long-term interest rates in the euro area over the past decade." 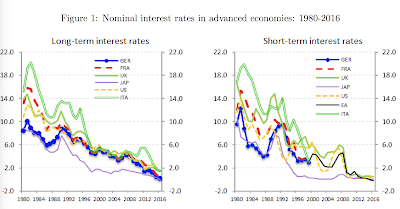 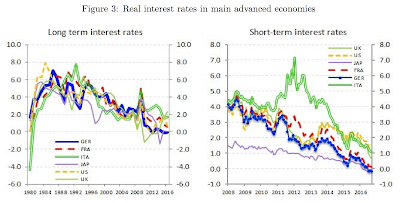 Using EU Commission projected dependency ratios to 2025, the authors "illustrate that the foreseen structural change in terms of age structure of the population may dampen economic growth and continue exerting downward pressure on real interest rates also in the future".

Specifically, "the counterfactual projections suggest an economically and statistically relevant role for
demography. Interest rates would have been higher and economic activity growth measures stronger under the assumed more favorable historical demographic assumptions. Concerning the forward-looking assessment, interest rates would remain at relatively low levels under the assumption that demography develops as projected by the EC, and would rise visibly only under the assumed more favorable forward paths for dependency ratios." 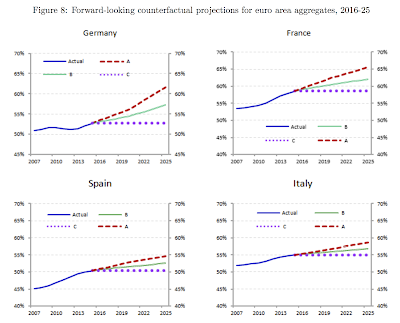 And now, translating the above dependency ratios into macroeconomic performance:

Notice the following: under both, the adverse (European Commission estimates) and the moderate (central - green) scenarios, we have real GDP growth materially below 1 percent by 2025 and on average, below historical average levels for pre-crisis period. This is secular stagnation. In fact, even under the benign scenario of no demographic change from 2015, growth rate is unimpressive. Potential output panel confirms this.