Bitcoin is just one of the cryptocurrencies, albeit the dominant one by market capitalisation and mining assets deployment. The cryptocurrency is best known for volatility of its exchange rate to key fiat currencies and other commodities, but the more interesting aspect of the Bitcoin (and other cryptos) is their hunger for energy. Cryptos are based on blockchain technologies that promise a range of benefits (majority unverified or untested or both), amongst which the high degree of security and peer-to-peer data registry, both of which are supported by the mining processes that effectively require deployment of  a vast amount of hash/algorithmic calculations in order to create data storage units, or blocks. In a sense, energy (electricity) is the main input into creation of blockchain records of transactions.

As the result, it is important to understand Bitcoin (and other cryptos) energy efficiency and utilisation, from three perspectives:
1) Direct efficiency - value added by the use of energy in mining Bitcoin per unit of BTC and unit of information recorded on a blockchain;
2) Economic efficiency or opportunity cost of using the energy expended on mining; and
3) Environmental efficiency - the environmental impact of energy used.

To-date, estimating the total demand for electricity arising from Bitcoin mining (let alone from mining of other cryptos) has been a huge challenge, primarily because Bitcoin miners are too often located in secretive jurisdiction, do not report any data about their operations and, quite often, can be highly atomistic. Although Bitcoin mining is a concentrated activity - with a small number of mega-miners and mining pools dominating the market - there is still a cottage industry of amateur and smaller scale miners sprinkled around the globe.

Thus, to-date, we have only very scant understanding of just how much of the scarce resource (energy) does the new industry of cryptos mining consume.

A new paper, published in a peer-reviewed journal, Joule, which is a reputable academic journal, titled "Bitcoin's Growing Energy Problem" and authored by Alex de Viries (Experience Center of PwC, Amsterdam, the Netherlands) attempts exactly this. The paper is the first in the literature to be peer-reviewed and uses a new methodology to discern trends in Bitcoin's electric energy consumption. The paper does not cover other cryptos, so its conclusions need to be scaled to estimate the entire impact of cryptocurrencies energy use.

The findings of de Viries are striking. He estimates the current Bitcoin usage of energy at 2.55 gigawatts, close to that of Ireland (3.1GW), approaching 7.67GW that "could already be reached in 2018", comparable to Austria (8.2GW). When reached, this will amount to 0.5% of the total world electricity consumption.

Per 'efficiency of blockchain', a single transaction on Bitcoin network uses as much electricity as an average household in the Netherlands uses in a month. Which is, put frankly, mad, wasteful and utterly unrealistic as far as transactions costs go for the network. 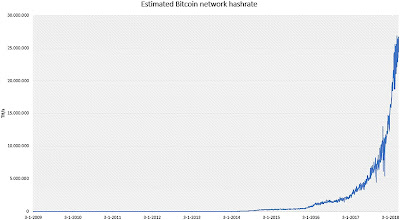 The key to the above numbers is that they vastly underestimate the true costs of Bitcoin and other cryptos to the global economy. The paper focuses solely on energy used on mining. However, other activities that sustain Bitcoin and blockchains are also energy-intensive, including trading in coins/tokens, storage of information blocks, etc. Worse, mining and processing / servicing of the networks required use of constant electricity supply, which means that the energy mix that goes to sustain cryptocurrencies operations is the worst from environmental quality perspective and must rely on heavy use of fossil fuels in the top up range of electricity demand spectrum. The environmental costs of Bitcoin and cryptos is staggering.

Scaling up Bitcoin figures from de Viries; paper to include other major cryptocurrencies would require factoring in the BTC's share of the total crypto markets by energy use. A proxy (an imperfect one) for this is BTC's total share of the cryptocurrencies publicly traded markets which stood at around 37.3% as of May 16, 2018. Assuming this proxy holds for mining and servicing costs, total demand for electricity from the cryptocurrencies and blockchain use around the world is more than 2.55GW/0.37 or more than 6.9GW, with de Viries' model implying that by year end, the system of cryptocurrencies can be burning through a staggering 1.35% of total electricity supply around the world.

The problem with the key cryptocurrencies proposition is that the system of blockchain-based public networks can deliver lower cost, higher efficiency alternatives to current records creation and storage. This proposition simply does not hold in the current energy demand environment.

My new contribution to the Cayman Financial Review is available, covering the key aspects of the fundamentals (or lac of such) behind the crypto currencies valuations: http://www.caymanfinancialreview.com/2018/01/29/learning-from-the-present-what-financial-economics-tells-us-about-bitcoin/. 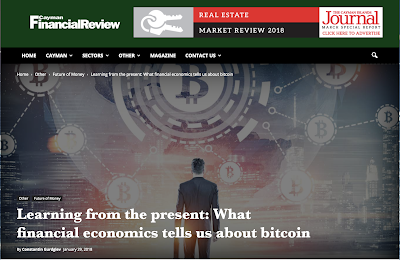