For anyone interested in the topics of wealth inequality, structure of the modern (anti-market) economy and secular stagnation, here is an interview with economist Angus Deaton on the subject of market concentration, rent seeking and rising inequality: https://promarket.org/angus-deaton-discussed-driver-inequality-america-easier-rent-seekers-affect-policy-much-europe/.

I cover this in our economics courses, both in TCD and MIIS, as well as on this blog (see here: http://trueeconomics.blogspot.com/2018/02/7218-american-wages-corporotocracy-why.html).

In simple terms, rising degree of oligopolization or monopolization of the U.S. (and global) economy is, in my opinion, responsible for simultaneous loss of dynamism (diminished entrepreneurship, weakened innovation) in the markets, the dynamics of the secular stagnation and, as noted in our working paper here (http://trueeconomics.blogspot.com/2017/09/7917-millennials-support-for-liberal.html), for the structural decline in our preferences for liberal, Western, values.

As Deaton notes, "Monopoly, I think, is a big part of the story. Both monopoly and monopsony contribute to lower real wages (including higher prices, fewer jobs, and slower productivity growth)—just a textbook case! But there are things like contracting out, which are making it much harder at the bottom, or local licensing requirements—mechanisms for making rich people richer at the expense of stopping poor people starting businesses and stifling entrepreneurship. There are also more traditional mechanisms other than rent-seeking, like the tax system. All these affect the distribution of income very directly. One of the things that seem to be going on more than it used to be is rent-seeking that’s redistributing upwards."

While I agree with his top level analysis on the evils of monopolization, I find the arguments in favour of unions-led 'redistribution downward' to be extremely selective. Unions co-created the current rent-seeking system through (1) collusion with capital owners, and (2) selective redistribution based on membership, as opposed to merit. In other words, unions were the very same rent seekers as corporations. And, just as capital owners, unions restricted redistribution downstream to select few workers at the expense of all others. Which means returning unions to a monopoly power of representation of labor is a fallacious approach to solving the current problem. Instead, we need to make people shareholders in capital via direct provision of carefully structured equity.

Disagreements aside, a very good interview with Deaton, worth reading.

Pooling together a range of indicators for wages, Goldman Sachs' Wage Tracker attempts to capture more accurate representation of wages dynamics in the U.S. Here is the latest chart, courtesy of the Zero Hedge (https://www.zerohedge.com/news/2018-02-05/goldman-exposes-americas-corporatocracy-wage-growth-slowing-not-rising) 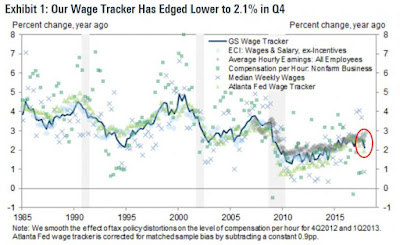 According to GS, wage growth is not only anaemic, at 2.1% y/y in 4Q 2017, and contrary to the mainstream media reports and official stats far from blistering, but it has been anaemic since the Global Financial Crisis. The latter consideration is non-trivial, because it implies two things:

The first point falls squarely within the secular stagnation thesis on the supply side: as the U.S. economy becomes more monopolistic, the engines for technological innovation switch to differentiation through less significant, but more frequent incremental innovation. This means that more technology is not enabling more investment, reducing the forces of creative destruction and lowering entrepreneurship and labor productivity growth.
The second point supports secular stagnation on the demand side: as households' leverage is rising (slower growth in income, faster growth of debt loads), the growth capacity of the economy is becoming exhausted. Longer term growth rates contract and future income growth flattens out as well. The end game here is destabilization of the social order: leverage risk carries the risk of significant underfunding of the future pensions, it also reduces households' capacity to acquire homes that can be used for cheaper housing during pensionable years. Leveraging of parents leads to reduced capacity to fund education for children, lowering quantity and quality of education that can be attained by the future generation. Alternatively, for those who can attain credit for schooling, this shifts more debt into the earlier years of the household formation for the younger adults, depressing the rates of their future investment and savings.
Goldman's research attempts to put a number on the costs of these dynamics, saying that in the longer run, rising concentration in the American private sector economy implies a 0.25% annual drop in wages growth since 2001. While the number appears to be small, it is significant. From economic perspective this implies 3.95% lower cumulative life cycle earnings for a person starting their career. And that is without accounting for the effects of the Great Recession. A person with a life cycle average earnings of USD50,000 would earn USD940,000 less over a 30-year long career under GS estimated impact scenario, than a person working in the economy with lower degree of corporate concentration.
The 0.25% effect GS estimate is ambiguous. So take a different view: prior to the Global Financial Crisis, longer term wages growth was averaging above 3% pa. Today, in the 'Best Recovery, Ever' we have an average of around 2.2-2.4%. The gap is greater than 0.6-0.8 percentage points and is persistent. So take it at 0.6% over the longer term, forward, the lower envelope of the gap. Under that scenario, life cycle earnings of the same individual with USD 50,000 average life cycle income will be lower, cumulatively, by USD 1.53 million (or -6.4%).
That is a lot of cash that is not going to be earned by people who need to buy homes, healthcare, education, raise kids and save for pensions.
Remember the "Don't be evil" motto of one of these concentration behemoths that we celebrate as the champion of the American Dream? Well, their growing market power is doing no good for that very same Dream.
Meanwhile, on academic side of things, the supply side secular stagnation thesis must be, from here on, augmented by yet another cause for a long term structural slowdown: the rising market concentration in the hands of the American Corporatocracy.