This blog has been consistently warning about the continued pressures on the U.S. (and global) economy. In fact, bringing together two strands of research my a range of economists, I defined the term 'twin secular stagnations' to describe a trend of structural long term decline in the potential growth rates on

The topic has not gone away, even though media commentariate in the U.S. and elsewhere have been fully consumed by the waves of optimism stemming from the tale of a 'robust growth' cycle.
Well, guess what: the 'spectacular' or 'tremendous' (using White House terminology) growth is largely a cyclical phenomena, as the latest research from the U.S. Federal Reserve Bank of San Francisco indicates.  You can read the full note here: https://www.frbsf.org/economic-research/files/el2018-04.pdf. The core is in this chart: 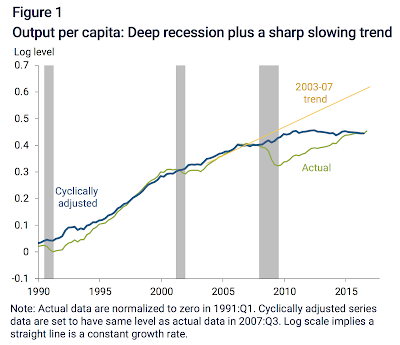 You can see the flattening out and the decline in the cyclically-adjusted growth rate (the blue line).  This line shows us the rates of growth smoothing out the effects of growth-and-recessions cycles. Secular stagnation is still here: "As expected, the cyclical adjustment removes the sharp drop in actual output associated with the recession. But since then, the trajectory of the blue line is nowhere close to a straight line projection from the 2007 peak. Rather, cyclically adjusted output per person rose slowly after 2007 and then plateaued in recent years."
The authors link this worrying development to supply-side slowdown in productivity growth, and they clearly state that this slowdown in productivity growth pre-dates the Great Recession. In other words, the collapse in productivity growth is structural, not cyclical.
"The seeds of the disappointing growth in output were sown before the recession in the form of slow productivity growth and a declining labor force participation rate. Quantitatively, relative to the recoveries of the 1980s, 1990s, and early 2000s, cyclically adjusted output per person has grown about 1¾ percentage points per year more slowly since 2009. According to our analysis, about a percentage point of this is explained by the shortfall in productivity growth and about ¾ percentage
point is explained by the shortfall in labor force participation."
The latter is shocking! 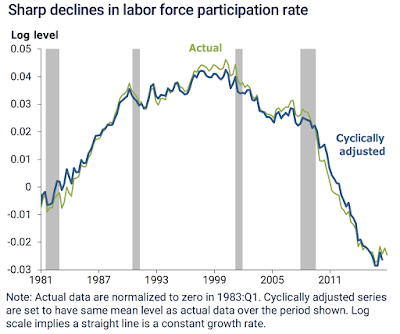 So no, folks, the U.S. economy has not been doing 'ugely' well since 2009. It has not been doing better, either, than in the pre-crisis period. In fact, the U.S. economy has lost a lot of its long run economic growth potential. And so far, there is absolutely nothing anyone in Washington is willing to do about changing that long-term decline, because doing so will require deep reforms and rebalancing of the economy away from oligopolistic and monopolistic competition, away from rent seeking, away from rewarding physical capital at the expense of human capital, as well as reducing massive drags on demand side, including healthcare and education costs, debt overhang in households (especially younger cohorts), abating skyrocketing rents & property inflation in key urban locations, and so on.
Care to suggest any party in Washington willing to tackle these?..