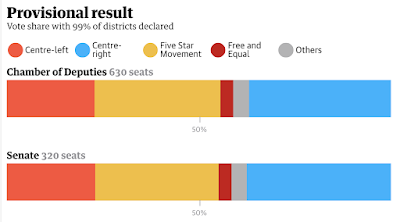 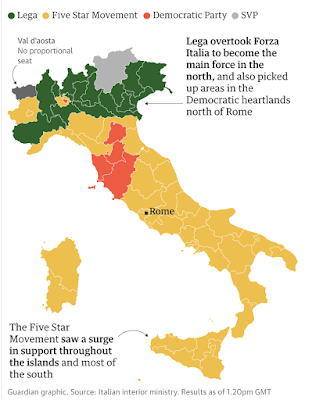 Now, what does this mean?

M5S - the 'Five Star Movement' has consolidated and expanded its launching position of 2013, despite virtually all analysts declaring the party to be 'falling' in support, especially after 2017 local elections. Welcome to the world of VUCA, where the more 'accomplished' the analyst, the less accurate are her/his predictions, because our traditional analytical tools miss the C & A bits of VUCA (complexity & ambiguity).

Renzi & mainstream politics have lost. His PDs are decimated. They have only themselves to blame: centre-left ideology is of nil distinction from centre and centre-right these days. Not only in Italy, but elsewhere too: just observe the U.S. Democrats sparing with the U.S. Republicans on virtually everything, save actual policies. The squabbling that the lack of ideological core implies is intense within the centre-left in Italy. Just as it is intense elsewhere (e.g. the U.S., where the centre-left's only differentiation from the centre-right is who to blame for the country problems, save blaming themselves).

Centre-right (Berlusconi) failed to capture anyone's hearts and minds, so the Lega Nord has taken its votes. Which makes Lega a major winner in the election: the party went from its cyclical low of 4 percent in 2013 election to its historical peak of around 18 percent in this election. The change of leadership in 2013 (to Salvini) has paid off.

Key takeaway from all of this is that in the modern, highly volatile, uncertain, complex and ambiguous political environment, writing off populist parties at the extreme o political spectrum is a dangerous game. We think of these parties as being driven to successes and subsequent failures by individual personalities of their leaders. That does not appear to be the case. Complexity overrides trends.

Meanwhile, in Brussels, power-fixing mode was on. As reported in the Guardian: "The [EU] commission’s chief spokesman, Margaritis Schinas, told reporters its president, Jean-Claude Juncker, wanted to see a “stable government in Italy” and “regarding the potential impact and so on and so forth... ‘Keep calm and carry on’”. In other words, get Renzi back by all possible means and do not challenge centrism. That is just another manifestation of VUCA for you: the ossified elites dependent on status quo ante will only recognise VUCA effects after they drive the system to a point of no return.