In their paper, "Talent vs Luck: the role of randomness in success and failure", A. Pluchino. A. E. Biondo, A. Rapisarda (25 Feb 2018: https://arxiv.org/pdf/1802.07068.pdf) tackle the mythology of the "dominant meritocratic paradigm of highly competitive Western cultures... rooted on the belief that success is due mainly, if not exclusively, to personal qualities such as talent, intelligence, skills, efforts or risk taking".

The authors note that, although "sometimes, we are willing to admit that a certain degree of luck could also play a role in achieving significant material success, ...it is rather common to underestimate the importance of external forces in individual successful stories".

Some priors first: "intelligence or talent exhibit a Gaussian distribution among the population, whereas the distribution of wealth - considered a proxy of success - follows typically a power law (Pareto law). Such a discrepancy between a Normal distribution of inputs, suggests that some hidden ingredient is at work behind the scenes."

The authors show evidence that suggests that "such an [missing] ingredient is just randomness". Or, put differently, a chance.

The authors "show that, if it is true that some degree of talent is necessary to be successful in life, almost never the most talented people reach the highest peaks of success, being overtaken by mediocre but sensibly luckier individuals."

Figure 5 taken from the paper shows: 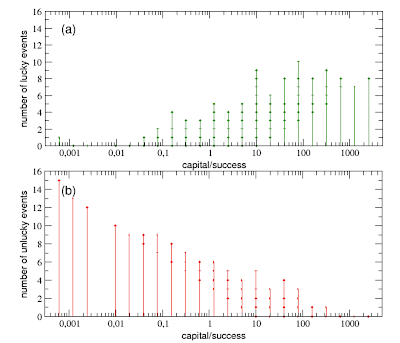 Figure 7 shows:
In panel (a): Distribution of the final capital/success for a population with different random initial conditions, that follows a power law.
In panel (b): The final capital of the most successful individuals is "reported as function of their talent". 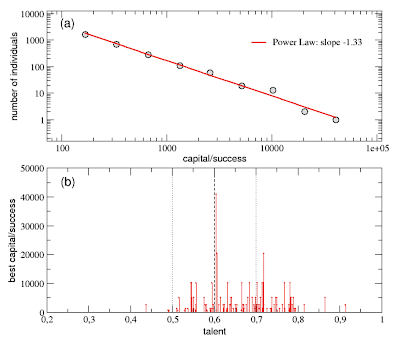 Overall, "people with a medium-high talent result to be, on average, more successful than people with low or medium-low talent, but very often the most successful individual is a moderately gifted agent and only rarely the most talented one.


Main conclusions on the paper are:


The results are "a warning against the risks of what we call the ”naive meritocracy” which, underestimating the role of randomness among the determinants of success, often fail to give honors and rewards to the most competent people."