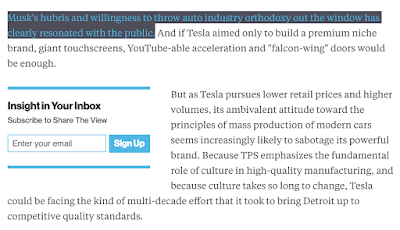 Now, personally, I admire Musk's entrepreneurial spirit and ability. But I do not own Tesla stock and do not intend to buy its cars. Because when on strips out all the hype surrounding this company, it's 'disruption' model borrows heavily from governance paradigms set up by another Silicon Valley 'disruption darling' - Uber, its financial model borrows heavily from the dot.com era pioneers, and its management model is more proximate to the 20th century Detroit than to the 21st century Germany.
If you hold Tesla stock, you need to decide whether all of the 8 points above can be addressed successfully, alongside the problems of production targets ramp up, new models launches and other core manufacturing bottlenecks, within an uncertain time frame that avoids triggering severe financial distress? If your answer is 'yes' I would love to hear from you how that can be possible for a company that never in its history delivered on a major target set on time. If your answer is 'no', you should consider timing your exit.