Quote of the month, if not of the year, belongs to yet another Trump Administration 'draing the swamp hero, Mick Mulvaney, currently the White House budget director and, according to some rumours, a prime candidate to be the next Chief of Staff. Speaking at the American Bankers Association, Muvaney, who previously served as a Congressman declared: "We had a hierarchy in my office in Congress. If you're a lobbyist who never gave us money, I didn't talk to you. If you're a lobbyist who gave us money, I might talk to you."

So here we have it, folks: top Trump official claiming on the record to have engaged in a cash-for-influence peddling, the very same offence that Trump campaign routinely accused the Clinton Foundation of.

That is some draining of the Washington swamp that President Trump accomplished. Right there, in swamp's prime dweller's own words.

Link to the quote: http://www.businessinsider.com/mick-mulvaney-tells-bankers-donate-to-congress-for-influence-2018-4.

As an aside, Pew Research data shows that the American people, by a large majority, are aware of the deep corruption in Washington. "Americans think that those who donate a lot of money to elected officials have more political influence than others. An overwhelming majority (77%) supports limits on the amount of money individuals and organizations can spend on political campaigns and issues. And nearly two-thirds of Americans (65%) say new laws could be effective in reducing the role of money in politics." (see http://assets.pewresearch.org/wp-content/uploads/sites/5/2018/04/26140617/4-26-2018-Democracy-release.pdf). 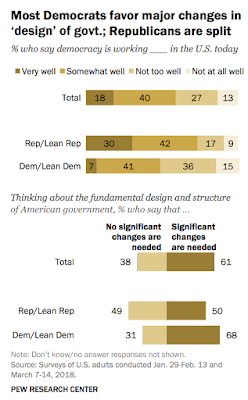 Any surprise, when the likes of Mulvaney are running public offices?