NY Fed just published some interesting numbers on President Trump's Trade War with China. Available here: https://libertystreeteconomics.newyorkfed.org/2019/05/new-china-tariffs-increase-costs-to-us-households.html, the Fed note states that per recent study "the 2018 tariffs imposed an annual cost of $419 for the typical household. This cost comprises two components: the first, an added tax burden faced by consumers, and the second, a deadweight or efficiency loss... the tariffs that the United States imposed in 2018 have had complete passthrough into domestic prices of imports, which means that Chinese exporters did not reduce their prices. Hence, U.S. domestic prices at the border have risen one‑for-one with the tariffs levied in that year. Our study also found that a 10 percent tariff reduced import demand by 43 percent."

The Fed note states that, of course, the net loss to the U.S. economy is mitigated by the fact that the tariffs revenue is collected by the Federal Government and "could , in principle, be rebated". Alas, this is of little help to ordinary American households, because the U.S. Federal Government is not particularly know to be efficient spender of the money it collects. One can't really argue that taking $419 from an average household and pumping the cash into, say, new missiles and bombs to be dropped in Yemen is an equivalent economic activity. Or, for that matter, spending the same $419 on fighting in Afghanistan, or subsidizing loss-making perpetually insolvent boatbuilding docks in the U.S. that are already reliant on the atavistic Jones Act to sustain any pretence at building something. And so on... you get the drift.

The Fed researchers go on: "Some firms may also reorganize their supply chains in order to purchase their products from other, cheaper sources. For example, the 10 percent tariffs on Chinese imports might cause some firms to switch their sourcing of products from a Chinese firm offering goods for $100 a unit to a less efficient Vietnamese firm offering the product for $109. In this case, the cost to the importer has risen by nine dollars, but there is no offsetting tariff revenue being paid to the government. This tariff-induced shift in supply chains is therefore called a deadweight or efficiency loss." And the deadweight loss is fully, even in theory - forget practice - carried by the households.

Worse, "economic theory tells us that deadweight losses tend to rise more than proportionally as tariffs rise because importers are induced to shift to ever more expensive sources of supply as the tariffs rise."

How does that work? Marvellously, of course.

"... Compare the estimates of the costs of the 2018 tariffs with those of the recently announced higher tariffs on $200 billion of Chinese products. ...in November 2018, purchasers of imports were paying $3 billion per month in added tax costs and experiencing another $1.4 billion in deadweight losses. Thus, the total bill for U.S. importers was $4.4 billion per month. If we annualize these numbers, they amount to a cost of $52.8 billion, or $414 per household. Of this cost, $282 per household per year was flowing into government coffers as a tax increase and could theoretically be rebated. ... However, deadweight losses accounted for an additional $132 to households per annum and represent a net loss to the U.S. economy that is in excess of any tariff revenue collected by the government."

Now, the Fed study does not take into the account that higher prices charged on consumers as the result of tariffs are also subject to sales taxes imposed at the State level. Which means that for a 7% sales tax state, actual out of pocket losses for 2018-2019 tariffs war for an average household will be in the region of $889 per annum.

Based on the most recent data from the Tax Policy Center, "the middle one-fifth of income earners [in the U.S.] got an average tax cut of $1,090 — about $20 per biweekly paycheck" as a result of 2017 2017 Tax and Jobs Act (TCJA or Trump tax cuts). Transfers from corporate tax cuts to average salaried employee amounted to additional $233 per annum pre-tax. So an average household with two working parents gained somewhere in the neighborhood of $1,330 per annum from the 'massive tax cuts'.

The law of unintended consequences (or second order effects, as we call in economics) is ironclad: any policy reform has two sides to the coin, the side of forecasted and analyzed changes the reform engenders, and the side of consequences that appear after the reform has been enacted. The derivative proposition to this theorem is that the first side of the coin is what gets promoted by politicos in selling the reform, while the other side of the coin gets ignored until its consequences smack you in the face.

Behold the U.S. Tax Cuts and Jobs Act 2017, aka Trump's Tax Cuts, aka GOP's Gift for the Rich, aka... whatever you want to call it. Fitch Ratings recently released their analysis of the Act's unintended consequences, the impact the new law is likely to have on U.S. States' fiscal positions. And it is a tough read (see full note here: https://www.fitchratings.com/site/re/10025493).

"Recently enacted federal tax changes (H.R.1) are making budgeting and revenue forecasting more complex for many U.S. state governments," says Fitch. "...provisions including the cap on SALT deductions are a likely trigger behind a spike in state revenue collections for the current fiscal year. In Massachusetts for example, individual income tax collections through January 2018 were up nearly 12% from the prior year, this after the commonwealth recorded just 3% annual growth in January 2017. Many states are seeing robust year-over-year gains in revenue collections, though this will likely amount to little more than a one-time boost with income tax collections set to level off for the rest of the fiscal year."

State tax revenues can increase this year because, for example, of reduced Federal tax liabilities faced by households. As income tax at federal level falls, State tax deductions taken by households on their personal income for Federal tax liabilities will also fall, resulting in an increase in tax revenues to the States. Similarly, as Federal corporate income tax falls, and, assuming, corporate income rises, States will be able to collect increased revenues from the corporate activity domiciled in their jurisdictions. All of this implies higher tax revenues for the States. Offsetting these higher tax revenues, the Federal Government transfers to the individual states will likely decline as deficits balloon and as Pentagon demands an ever-greater share of Federal Budget.

In other words, the tax cuts are working, but do not expect these to continue working into the future. Or put differently, don't spend one-off revenue increases, folks. For high-spending States, like California, it is tempting to throw new money onto old bonfires, increasing allocations to public pensions and state hiring programs. But 2017 Tax Reform is a combination of permanent and temporary measures, with the latter more dominant than the former. Expiration of these measures, as well as complex interaction between various tax measures, suggest that the longer term effect of the Act on States' finances is not predictable and cannot be expected to remain in place indefinitely.

As Fitch noted: "Assessing the long-term implications of H.R. 1 will not be an easy task due to the complicated interrelationships of the law changes and because many of the provisions are scheduled to expire within the next decade. Yet-to-be finalized federal regulations around the tax bill and the possibility of additional federal legislation add more complexity and risk for states."

My column for the current issue of the Cayman Financial Review is out: http://www.caymanfinancialreview.com/2018/04/19/the-goldilocks-economy-of-state-policies/. 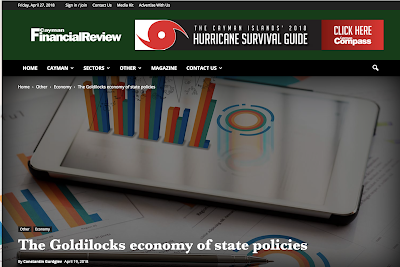