While the U.S. war in Afghanistan drags closer to marking 17th anniversary, and the U.S. war on drugs in Latin America rages into its fourth decade (the U.S. has spent more than 1 trillion dollars since the mid 1970s combatting narco-mafias in Latin America), global drugs trade is booming.

According to the data from The Economist, global drugs production has hit a new record high and most of this rise is accounted for by, you've guessed it, Afghanistan (for opium) and Latin America (for cocaine): 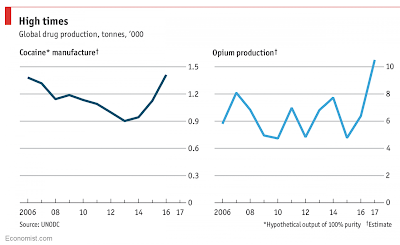 For some background on disastrous fallout from the U.S. war on drugs cartels in Latin America, see https://www.theguardian.com/global-development-professionals-network/2014/feb/03/us-war-on-drugs-impact-in-latin-american.

For background on the U.S. policymakers' surprising inability to learn from their own failures: http://trueeconomics.blogspot.com/2018/05/12518-us-war-in-afghanistan-when.html.

On and off, I have written occasionally about the complete lack of value-for-money accounting in the U.S. military spending and its imaginary successes. This is just another one of such occasions.

Here is a summary of the Special Report by the U.S. military watchdog, filed by the neoconservative in it is geopolitical positioning Foreign Policy magazine (the folks who support wars, like the one conducted in the Afghanistan): http://foreignpolicy.com/2018/05/01/the-afghan-war-isnt-being-won-says-new-pentagon-audit/.

I have summed the main findings in a series of tweets reproduced here:

Special Inspector General for Afghanistan reconstruction report of May 1: suicide attacks in Afghanistan up 50% in 2017, opium production +63%. Last GDP growth was recorded in 2012, since then, continued recession +

+ Number of bombs dropped by the West in Afghanistan in Jan-Feb 2018 was the highest it's been since 2013. Suicide attacks in Afghanistan are up 50% in 2017. Casualties from attacks are steadily rising. Sectarian attacks tripled in 2017. +

+ Only 65% of the Afghan population lives under government control, even though direct US expenditures to Afghan security forces of $78bn > than third largest military budget in the world. +

Note: the IMF data does not show decline in Afghanistan's GDP since 2013 in real terms (domestic currency), or in current US dollar terms, or in PPP-adjusted terms. The issue here is that the IMF data shows national accounts that include U.S. and Western Coalition spending and investment in the country and does not account for population growth. In fact: Afghanistan ranked 23rd lowest in the world in income per capita terms (using PPP-adjusted international dollars) in 2012. In 2017 it was ranked 19th lowest. This does mean that the economy got worse in Afghanistan in recent years. In line with this, Reuters reported earlier this year that Afghanistan's poverty rates have risen "sharply" over the last five years (https://www.reuters.com/article/us-afghanistan-economy/afghanistans-poverty-rate-rises-as-economy-suffers-idUSKBN1I818X) from 38% in 2011-2012, to 55% in 2016-2017. "Food insecurity has risen from 30.1 percent to 44.6 percent in five years, meaning many more people are forced to sell their land, take their children out of school to work or depend on food aid".

More details?  In September 2014, Foreign Policy wrote about another report by the same watchdog, headlining their story with a telling tag line: "Watchdog: United States Made Corruption in Afghanistan ‘Pervasive and Entrenched’". It is worth repeating that Foreign Policy is an intellectual bulwark of neoconservative doctrine that saw nothing wrong with any war the U.S. has started in the past.
The U.S. has already spent more on the war in Afghanistan (and related 'investments' there) than the entire country's GDP over the last decade. And it is tied into spending vastly more (https://www.forbes.com/sites/realspin/2016/11/21/war-and-debt-and-fiscal-ramifications-to-2053/#651c540b3d51 and http://trueeconomics.blogspot.com/2017/11/201117-tallying-costs-us-wars-in-iraq.html).

In January this year, to make the valiant efforts by the Western Coalition (read: Washington) in Afghanistan more transparent, Pentagon sought to withhold key information about the campaign from the public (https://www.reuters.com/article/us-afghanistan-usa-oversight/pentagon-blocks-release-of-key-data-on-afghan-war-watchdog-idUSKBN1FJ0GZ).

Yet, despite the U.S. larger-than-reported presence in the country, January report by SIGAR noted that  "43 percent of Afghanistan’s districts were either under Taliban control or being contested". This was after more than 16 years of war waged against the Taliban and other extremist groups by the largest, the mightiest and the best-equipped military force in the world. "Last year [2017], U.S. forces in Afghanistan restricted the amount of data it provided on the ANDSF, including casualties, personnel strength and attrition rates - data that has now been completely withheld." (See https://www.cbsnews.com/news/pentagon-fails-to-disclose-troop-numbers-in-syria-iraq-afghanistan/ for more details).

In 2011, ten years into the campaign that promised to bring democracy and human rights to Afghanistan, the U.S. State Department stopped listing human rights as an objective for the U.S. Afghanistan policies. Not because these rights have been fully restored (or rather instituted), but because it became too embarrassing to keep them in policy documents as a reminder of the U.S. failures.

Seventeenth year into what amounts to a small war for the enormous military machine of the Fourth Rome, and the 'most brilliant', 'highly decorated', grossly overpaid and deeply revered in the popular media culture U.S. generals and politicos are clueless as to why the exceptionalist U.S. of A. has failed to control a dispersed gang of resistance fighters that, unlike the Vietnamese of the 1970s and the North Koreans of the 1950s, do not even have a superpower standing directly behind them. The reason, of course, is in the very ethos of the American power, the notions of exceptionalism and self-appointed mandate, both of which imply zero capacity to think based on historical and rational premises. As one of the authors on the topic quipped, quoting from Freud's 1914 paper Recollecting, Repeating, and Working Through,  "...the patient yields to the compulsion to repeat, which now replaces the impulsion to remember... The greater the resistance, the more extensively will acting out repetition replace remembering."

The Freud's quote (part of it) appears in this article from 2017 on the depressing comprehensiveness of the American war failure. It is worth a read: https://www.thenation.com/article/what-the-us-military-still-doesnt-understand-about-afghanistan/ for it narrates in some detail the process of the repeated denial of reality by, at this stage, the third presidential administration in Washington engaged in an imperial dance of victory amidst the defeat.

The staggering cost of the Washington's adventurism in Afghanistan (and Iraq, and Libya, and next up - Syria, as well as in other parts of the world) has now cost the U.S. one of its historically closest proxies/allies, Pakistan (https://www.reuters.com/article/us-usa-trump-pakistan-idUSKCN1B3125).  This is a major, strategic defeat, given Pakistan's role in the region and the potential for the strengthening of the Pakistan-India-China-Iran cluster of power contests that will undoubtedly shape the entire region into the future. In simple terms, the U.S. has lost not just the war in Afghanistan, but it is losing dominance over the large swath of land that constitutes the largest cluster of world's population and has strategically central importance to the global economy and resources.

These failures are not surprising, once one takes a more rational look at the U.S. military machine and the religious devotion to it exhibited by Washington and American press. Quoting at length from Forbes (https://www.forbes.com/sites/realspin/2016/11/21/war-and-debt-and-fiscal-ramifications-to-2053/#370435f3d51a):
"As it happens, the Pentagon is unique among federal agencies in having never undergone a full audit, an oversight with serious national security consequences. ...The good news is Congress has finally mandated an audit be completed by September of 2017, a deadline reached after the Department of Defense managed to skirt a government-wide audit requirement for more than two decades. The bad news is likely the audit results themselves. After all, a recent audit of the Army General Fund found bookkeepers somehow screwed up their accounting by $6.5 trillion in 2015. That number is particularly remarkable given that it is 13 times the size of the entire Pentagon budget for that year. “How could the Army misplace, fudge, misappropriate or otherwise lose $6.5 trillion?” asked an incredulous Matthew Gault reporting on the Army audit for War Is Boring. “It’s simple. Years of no oversight, bad accounting practices and crappy computer systems created this problem. And remember, this is just the Army and just its general fund.” If that’s the sort of rot we find in a single branch of the military, imagine the fiscal horrors yet to be uncovered throughout."
Note: the Defense Department delayed the audit start until December 2017 and is now promising a report from the auditors by November 2018. Worse, the audit is conducted by internal teams, in other words, the lunatics who run the asylum are now counting plates and pills in the place too. To put some veneer on this exercise, the Inspector General has hired 'external audit firms' to help analyse data collected by Pentagon's teams. The same 'audit firms' are some of the largest military and security consulting contractors, of course.

Meanwhile, the idiotic parroting of the past and failed narratives remains the leitmotif of the Washington's policy. Best exemplified by the amnesia-ridden, Ivy League-trained army of status quo dependent 'experts' and the headlines in the U.S. media echoing them: https://www.usnews.com/news/politics/articles/2017-11-27/victory-or-failure-in-afghanistan-2018-will-be-the-deciding-year. "Armed with a new strategy and renewed support from old allies, the Trump administration now believes it has everything it needs to win the war in Afghanistan." This, pretty much, sums up the best that the American-trained 'intellectual class' of the West Point-graduated generals and Harvard-trained 'analysts' can produce in place of a strategy.

The logical denouement of the U.S. failure to learn from Afghanistan adventure is the loss of the U.S. position in the region to China, followed by Iran, Pakistan, India and Russia - in that exact order. Afghanistan is likely to be the next - much larger than Syria - theatre of confrontation between Iran and Saudi-U.S. coalition, with Israel at a play too, and the American liabilities in such a conflict will be well beyond anything experienced in Iraq and Afghanistan combined. A proxy war between Iran and the U.S. via Afghanistan can risk spilling into an outright war between the two countries, which the U.S. will lose more decisively than Afghanistan, although the toll on Iran will be huge as well.

What Afghanistan has been exposing over the last 16 years, plus, is that the Pax Americana lacks not fire power, but vision, and that the lack of vision is what loses wars, and ends empires. Sail on, my thought-lacking friends from the Western Academia, military colleges, Washington's circles of Byzantine power-brokering expertise, and 'influential media'. Keep those aircraft carriers busy circling the globe. Keep awarding your military ranks free parking spaces at Walmarts and rent subsidies in the Paradise. 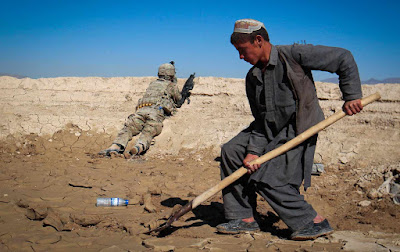