I have recently written about rising firm power in labour markets, driven by monopsonisation of the markets thanks to the continued development of the contingent workforce: http://trueeconomics.blogspot.com/2018/05/23518-contingent-workforce-online.html. In this, I reference a new paper "Concentration in US labour markets: Evidence from online vacancy data" by  Azar, J A, I Marinescu, M I Steinbaum and B Taska. The authors have just published a VOX blog post on their research, worth reading: https://voxeu.org/article/concentration-us-labour-markets. 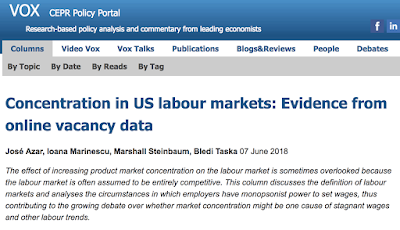 The promise of the contingent workforce and technological enablement of ‘shared economy’ is that today’s contingent workers and workers using own capital to supply services are free agents, at liberty to demand their own pay, work time, working conditions and employment terms in an open marketplace that creates no asymmetries between their employers and themselves. In economics terms, thus, the future of technologically-enabled contingent workforce is that of reduced monopsonisation.

Reminding the reader: monopsony, as defined in labour economics, is the market power of the employer over the employees. In the past, monopsonies primarily were associated with 'company towns' - highly concentrated labour markets dominated by a single employer. This notion seems to have gone away as transportation links between towns improved. In this context, increasing technological platforms penetration into the contingent / shared economies (e.g. creation of shared platforms like Uber and Lyft) should contribute to a reduction in monopsony power and the increase in the employee power.

Online labour markets are a natural testing ground for the proposition that technological transformation is capable of reducing monopsony power of employers, because they, in theory, offer a nearly-frictionless information and jobs flows between contractors and contractees, transparent information about pay and employment terms, and low cost of switching from one job to another.

The latter study mentioned above attempts to "rigorously estimate the degree of requester market power in a widely used online labour market – Amazon Mechanical Turk, or MTurk... the most popular online micro-task platform, allowing requesters (employers) to post jobs which workers can complete for."

The authors "provide evidence on labour market power by measuring how sensitive workers’ willingness to work is to the reward offered", by using the labour supply elasticity facing a firm (a standard measure of wage-setting (monopsony) power). "For example, if lowering wages by 10% leads to a 1% reduction in the workforce, this represents an elasticity of 0.1." To make their findings more robust, the authors use two methodologies for estimating labour supply elasticities:
1) Observational approach, which involves "data from a near-universe of tasks scraped from MTurk" to establish "how the offered reward affected the time it took to fill a particular task", and
2) Randomised experiments approach, uses "experimental variation, and analyse data from five previous experiments that randomised the wages of MTurk subjects. This randomised reward-setting provides ‘gold-standard’ evidence on market power, as we can see how MTurk workers responded to different wages."

The authors "empirically estimate both a ‘recruitment’ elasticity (comparable to what is recovered from the observational data) where workers see a reward and associated task as part of their normal browsing for jobs, and a ‘retention’ elasticity where workers, having already accepted a task, are given an opportunity to perform additional work for a randomised bonus payment."

The findings from both approaches are strikingly similar. Both "provide a remarkably consistent estimate of the labour supply elasticity facing MTurk requesters. As shown in Figure 2, the precision-weighted average experimental requester’s labour supply elasticity is 0.13 – this means that if a requester paid a 10% lower reward, they’d only lose around 1% of workers willing to perform the task. This suggests a very high degree of market power. The experimental estimates are quite close to those produced using the machine-learning based approach using observational data, which also suggest around 1% reduction in the willing workforce from a 10% lower wage." 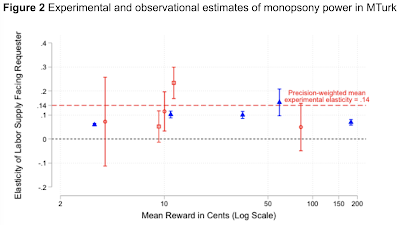 To put these findings into perspective, "if requesters are fully exploiting their market power, our evidence implies that they are paying workers less than 20% of the value added. This suggests that much of the surplus created by this online labour market platform is captured by employers... [the authors] ﬁnd a highly robust and surprisingly high degree of market power even in this large and diverse spot labour market."

In evolutionary terms, "MTurk workers and their advocates have long noted the asymmetry in market structure among themselves. Both efficiency and equality concerns have led to the rise of competing, ‘worker-friendly’ platforms..., and mechanisms for sharing information about good and bad requesters... Scientific funders such as Russell Sage have instituted minimum wages for crowd-sourced work. Our results suggest that these sentiments and policies may have an economic justification. ...Moreover, the hope that information technology will necessarily reduce search frictions and monopsony power in the labour market may be misplaced."

My take: the evidence on monopsony power in web-based contingent workforce platforms dovetails naturally into the evidence of monopolisation of the modern economies. Technological progress, that held the promise of freeing human capital from strict contractual limits on its returns, while delivering greater scope for technology-aided entrepreneurship and innovation, as well as the promise of the contingent workforce environment empowering greater returns to skills and labour are proving to be the exact opposites of what is being delivered by the new technologies which appear to be aiding greater transfer of power to technological, financial and even physical capital.