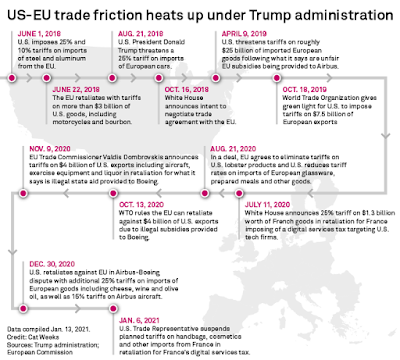 The key problem is that in his trade policy strategy, President Trump appears to be oblivious to several key factors that materially determine the true extent of imbalances the U.S. trade with the EU, including:

Prior to the G7 Summit President Trump complained in a tweet that the U.S. was running a deficit of USD 151 billion with the EU. The official figure from the U.S. Department of Commerce, however, is USD 153 billion but this figure only covers trade in goods.

The dynamics of full net cumulated 2003-207 balance in payments and trade for U.S.-EU trade, including forecast out to 2021 (pure trend forecast, not accounting for other factors that favour the U.S.) is presented below: 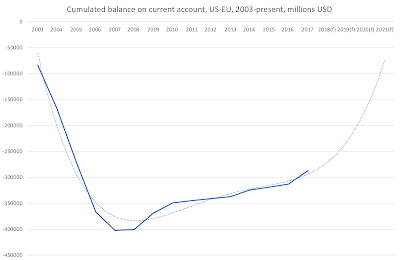 In simple terms, President Trump's trade war on the EU is unwarranted, dangerous, damaging to both economies and a major negative for the U.S. standing in the global economy. It is also reflective of his deeply economically illiterate understanding of the complexities of national accounts.