The U.S. figures prominently in the world of horrific stats, as do many other countries. Perhaps the most significant difference between these, however, is the fact that the U.S. claims high moral grounds when it comes to the rest of the world, despite having its own house out of order.

Here is one example: the U.S. often positions itself as the society based on two (amongst others) core ethical principles: law and order, and public support for ethical norms. Now, if the two values are taken together, the proposition would imply that the U.S. has law & norms-abiding citizenry (the average crime rate should be below that of the countries the U.S. lectures), plus a  functioning legal system (the punitive system of justice should be functioning alongside the preventative and rehabilitative functions). In conjunction, the three factors should combine to yield a relatively benign incarceration rates in the U.S. compared to other countries.

Pew Research data shows the exact opposite: http://www.pewresearch.org/fact-tank/2018/05/02/americas-incarceration-rate-is-at-a-two-decade-low/. While the U.S. incarceration rate has peaked and is declining, the U.S. remains a global outlier in terms of incarcerations per 100,000 people: 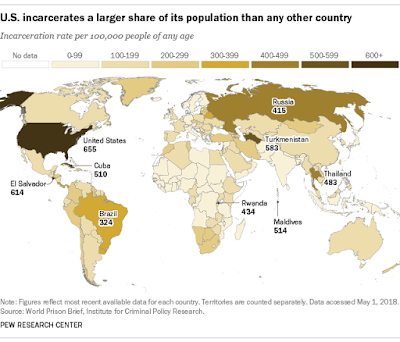 This presents an impossible dilemma:

In other words, what is impossible is the very claim of U.S. exceptionalism as a society with highly effective and functioning democratic law and order institutions while, simultaneously, being a law and norms-abiding society.
Thus, any analyst rating the U.S. legal system as being highly functional must simultaneously allow for the U.S. society to be disrespectful of laws and norms. Alternatively, any analyst claiming that the U.S. society is norms and laws-based must simultaneously allow for the U.S. justice system to be of low quality. One or the other, logically, applies.