BOFIT newsletter out today highlights the scale of restrictive trade measures applicable to the EU exporters across a number of significant markets: 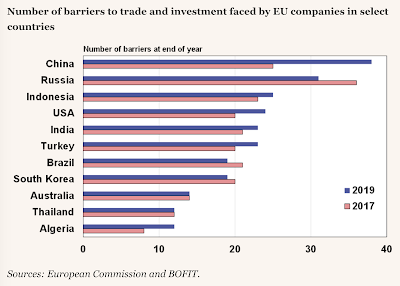 Of eleven countries included, three managed to lower trade and investment barriers applying to the EU companies over 2017-2019 period, two countries had unchanged barriers, and six showed increasing barriers to trade and investment. In a way, this reflects a shift away from trade and investment globalization focus on the last three decades toward more regionalized and even protectionist policies.
COVID19 pandemic is likely to accelerate this trend.
Yesterday, President Trump has suggested that the WTO is treating the U.S. "very badly"

In reality, the U.S. leads WTO in terms of dispute resolutions wins and in terms of intransigence to WTO functioning and reforms. Here is a slide from my lecture on international institutions frameworks highlighting this fact: 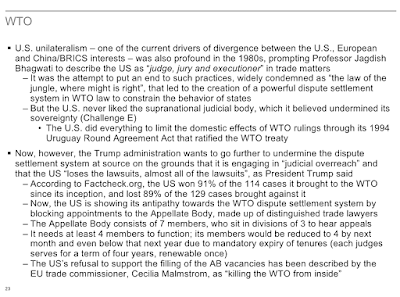 In the previous post, I also shown that the U.S. contributes disproportionately less than the EU and China to WTO budget: http://trueeconomics.blogspot.com/2018/07/3718-china-eu-and-us-arch-stantons-grave.html.

In fact, back in October 2017, President Trump claimed that: Trump, Oct. 25: "The WTO, World Trade Organization, was set up for the benefit for everybody but us. They have taken advantage of this country like you wouldn’t believe. And I say to my people, you tell them, like as an example, we lose the lawsuits, almost all of the lawsuits in the WTO — within the WTO. Because we have fewer judges than other countries. It’s set up as you can’t win. In other words, the panels are set up so that we don’t have majorities. It was set up for the benefit of taking advantage of the United States."

WTO dispute resolution rules require that none of the panelists on each 3-person panel hearing disputes cases can be from the country involved in a dispute (per Article 8: https://www.wto.org/english/docs_e/legal_e/28-dsu_e.htm). In other words, the number of experts from any particular country that are available to serve on dispute resolution panels is immaterial to the experts service in the U.S. dispute cases.

In reality, thus, the U.S. loses slightly fewer cases brought against it, than it wins cases brought against other nations by it. The high rates of U.S. losses and wins are fully comparable with those of other advanced economies and reflect, in fact, not some WTO bias against any given nation, but rather the simple fact that majority of nations, including the U.S. tend to bring to the WTO arbitration only such cases where concerns raised are well-founded and researched. Which, in effect, means that the WTO dispute resolutions system (slow as it might be) is effective at restricting the number of frivolous cases being brought to resolution, aka, a good thing.

Much of the above evidence does not just come from my own arguments alone. Here is an intelligent and pro-trade set of arguments about why the U.S. claims of unfair treatment under the WTO regime are not only wrong, but actually conceal the much less pleasant protectionist reality of the Washington's policies: https://www.forbes.com/sites/danikenson/2017/03/09/u-s-trade-laws-and-the-sovereignty-canard/2/#657177747edc.

In a recent statement on Fox News, the U.S. President has compared China and the EU in quite stark and unfavourable, to the EU, terms: ""The European Union is possibly as bad as China, just smaller. It’s terrible what they do to us,” Trump said." Contextually, the statement relates to trade, but it prompted a torrent of replies from Mr. Trump critics, pointing to various aspects of the statement as being untrue. One example: 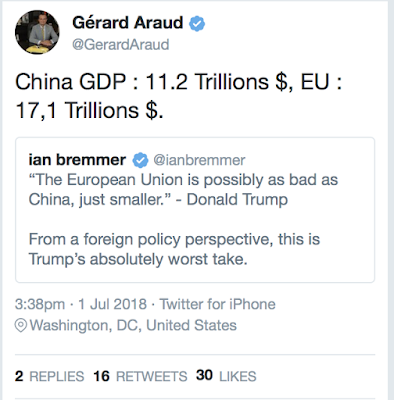 The problem is, as commonly the case with economic statistics, there is a number to suit any point of view, and the choice of metrics matters.

'Badness measures':
We can draw many more comparatives in trying to gauge what 'worse' and 'smaller' might mean in the case of China vs EU comparatives when it comes to possible White House-targeting criteria. In reality, economics, trade, trade policies and finance are complex. Far more complex than Spaghetti Western. Yet, even 'The Good, The Bad, and The Ugly' had serious shades of grey when it came to delineating the three villains Mexican standoff at the Arch Stanton's grave. 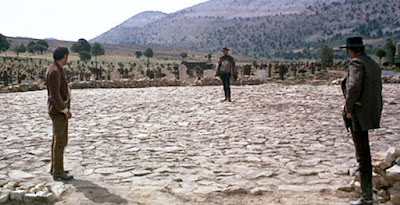