I have posted about the new World Bank report on Romania's uneven convergence experience in the previous post (here). One interesting chart in the report shows comparatives in labour productivity growth across a range of the Central European economies since the Global Financial Crisis. 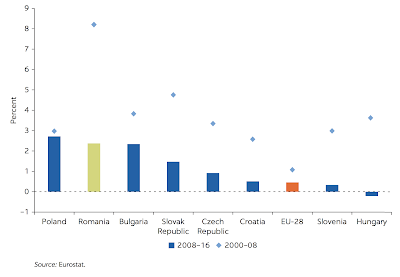 The chart is striking! All economies, save Poland - the 'dynamic Tigers of CEE' prior to the crisis - have posted marked declines in labour productivity growth, as did the EU28 as a whole. When one recognises the fact 2008-2016 period includes dramatic losses in employment, rise in unemployment and exits from the labour force during the period of the GFC, and the subsequent Euro Area Sovereign Debt Crisis - all of which have supported labour productivity to the upside - the losses in productivity growth would be even more pronounced.

This, of course, dovetails naturally with the twin secular stagnations thesis I have been writing about in these pages before. In particular, this data supports the supply-side secular stagnation thesis, especially the technological re-balancing proposition that implies that since the late 2000s, technological innovation has shifted toward increasingly substituting sources of economic value added away from labour and in favour of software/robotics/ICT forms of capital: 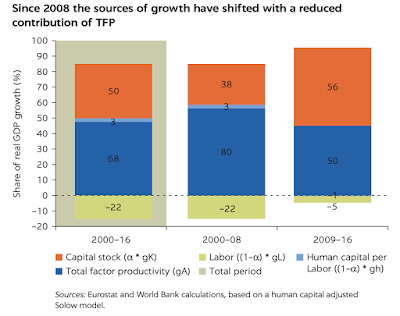 Human capital is the only offsetting factor for this trend of displacement. And it is lagging in the CEE: 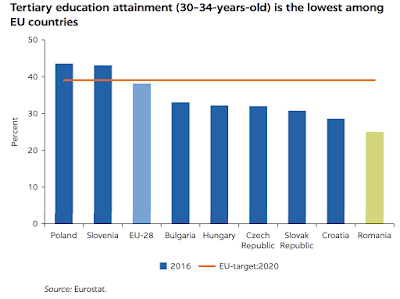 But the problem is worse than simple tertiary education figures suggest. Current trends in technological innovation stress data intensity, AI and full autonomy of technological systems from labour and human capital. Which implies that even educated and skilled workforce is no longer a buffer to displacement.

As the result, in countries like Romania, with huge slack in human capital and skills, investment is not flowing to education, training, entrepreneurship and other sources of human capital uplift: 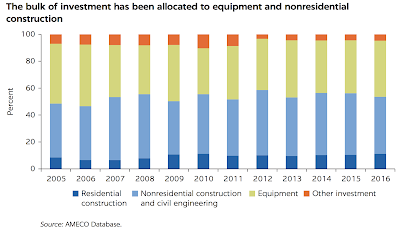 While barriers to entrepreneurship remain, if not rising: 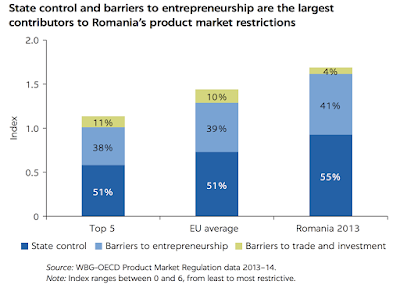 In effect, technological innovation in its current form is potentially driving down not only productivity growth, but also labour force participation. The result, as in the economies of the West:

These three factors contribute to an expanding army of voters who are marginalised within the system.
Romania is a canary in the European secular stagnation mine.