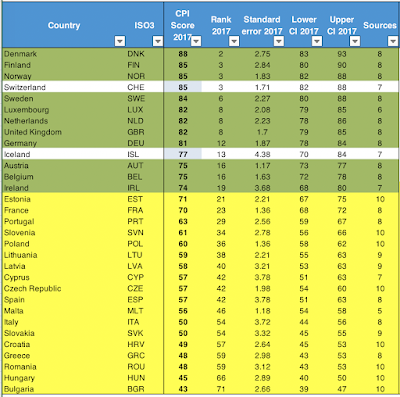 Now, in terms of dynamics, using TI’s data that traces comparable indices back to 2012:
- The U.S. performance in terms of corruption remains effectively poor. The country scored 73 on CPI in 2012-2013, and since then, the score roughy remained bounded between 74 and 75. Ireland, however, managed to improve significantly, relative to the past. In 2012, Irish CPI score was 69. Since then, it rose to a peak of 75 in 2015 and is currently standing at 74. So in terms of both 2012 to peak, and peak to 2017 dynamics, Ireland is doing reasonably well, even though we are still suffering from the low starting base.
Hey, anyone heard of any corruption convictions at the Four Courts recently?