Back in September 2017, Fitch (with Russia rating BBB-) estimated that the U.S. sanctions were costing Russia ‘one notch’ in terms of sovereign ratings, with ex-sanctions risk conditions for the Russian sovereign debt at BBB. Last week, Fitch retained long term debt rating for Russia at BBB- with positive outlook, noting the Russian economy’s relative resilience to sanctions.

Per Fitch, and confirmed by the Russian Finance Ministry analysis, Russia is looking at recording a budgetary surplus in 2018: 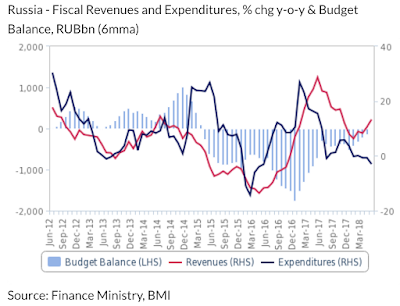 Fitch analysis projects the budget surplus to average 0.1% of GDP in 2018 and 0.3% in 2019, from deficits of 1.0% and 0.5%, respectively. This, alongside Russia’s strong performance in monetary policy have been noted by Fitch as core markers of the Russian economy’s resilience to external shocks, including the sanctions acceleration announced back in April 2018.

Looking forward, President Putin's RUB 8.0 trillion (ca USD127 bn) new spending priorities announced back in May will amount to roughly 7.0% of GDP over the next six years. These funds will go to support higher wages and pensions for the recipients of Federal and Local funding, as well as public investment uplift in education and core infrastructure. Per Fitch: “Due to a stronger fiscal position and a robust oil price outlook, the planned measures will not threaten the country's future budget surpluses. The government will also increase available funds by enforcing a tax overhaul and increasing [domestic] borrowing.” (see Chart below) 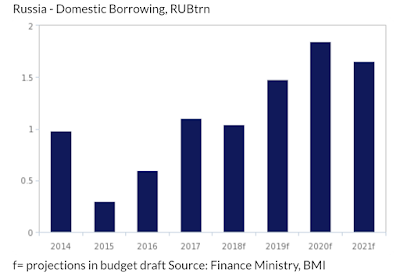 Resilience-inducing policies, when it comes to macroeconomic management of risks arising from sanctions regimes face by Russia include:

Net outrun is that even faced with escalating sanctions, and having unveiled a rather sizeable macro stimulus program, Moscow's finances remain brutally healthy. Fitch research foresees “a contained uptick in government debt levels over the coming years, with the debt burden rising from 17.4% of GDP in 2017 (IMF statistics) to about 18.3% GDP by 2020.” As share of Russian debt held by external funders continues to decline, these forecasts imply increased sustainability of overall debt levels.

In it’s recent assessment of the potential impact of the ‘Super-sanctions’ (The Defending American Security from Kremlin Aggression Act of 2018 (DASKAA)) planned by Washington, the worst case scenario of all U.S.-affiliated investors dumping Russian bonds implies 8-10% decline in foreign holdings of Russian Sovereign debt, which will likely raise yields on long-dated Russian Ruble-denominated debt by 0.5-0.8 percentage points. Based on August 6 analysis from Oxford Economics, Russia will have no trouble replacing exiting Western debt holders with Ruble-denominated debt issuance.

The key weakness for Russia is in structurally lower economic growth that set on around 2010-2011 and is likely to persist into 2022-2023 period (see IMF projections below): 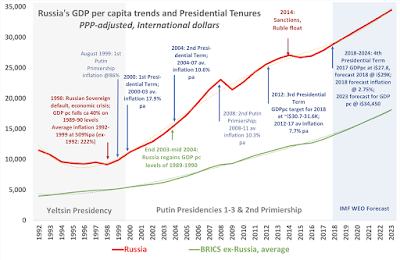 Russian GDP growth rose from 1.3% y/y in the 1Q 2018 to 1.8% in the 2Q, with 1H growth reading 1.6% y/y. The uptick was led by faster industrial output growth (rising almost 4% y/y in 2Q) and manufacturing (up 4.6% y/y in 2Q). These are preliminary estimates, subject to revisions and, based on the recent past revisions, it is quite likely that we will see higher growth rates in final reading. 1H 2018 fixed investment rose 3% y/y. Real wages rose 8% y/y in real terms, but household disposable real income was up only 2% at the end of 2Q 2018 due to slower growth in the 'grey economy' and in non-wage income. Despite the rising household credit uptake (up 19% y/y at the end of 2Q 2018), retail sales were up only 2.5%, broadly in-line with real income growth.

All of these trends are consistent with what we have been observing in recent years and are indicative of the structurally weaker economic conditions prevailing in the wake of the post-GFC economic recession and the energy prices shocks of 2014-2017.