I have written before, in the context of QE announcement by the ECB last week (see here: http://trueeconomics.blogspot.ie/2015/01/2312015-liquidity-fix-for-euro-what-for.html) that the real problem with the euro area monetary and economic aggregates has nothing to do with liquidity supply (the favourite excuse for doing all sorts of things that the ECB keeps throwing around), but rather with the debt overhang.

In plain, simple terms, there is too much debt on the books. Too much Government debt, too much private debt. The ECB cannot even begin directly addressing the unspoken crisis of the private debt. But it is certainly trying to 'extend-and-pretend' public and private debt away. This is what the fabled EUR1.14 trillion (or so) QE announcement is about: take debt surplus off the markets so more debt can be issued. More debt to add to already too much debt, therefore, is the only solution the ECB can devise.

While EUR1.14 trillion might sound impressive, in reality, once we abstract away from the fake problem of liquidity, is nothing to brag about. Take a look at the following chart: 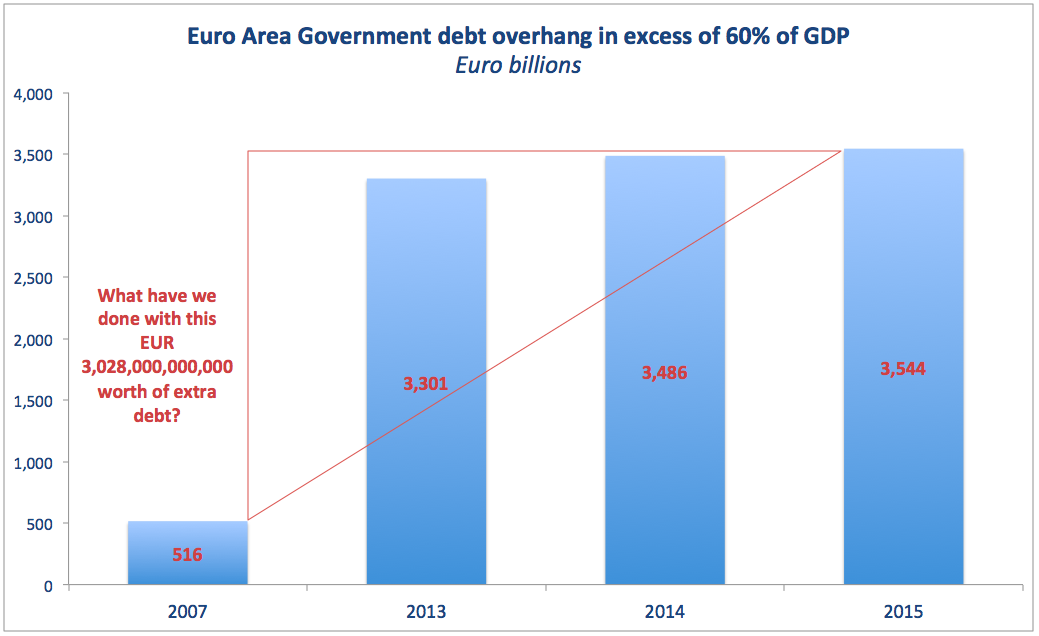 Forget the question in red, for the moment, and take in the numbers. Remember that 60% debt/GDP ratio is the long-term 'sustainability' target set by the Fiscal Compact - in other words, the long-term debt overhang, in EU-own terminology, is the bit of debt above that bound. By latest IMF stats, there is, roughly EUR3.5 trillion of debt overhang across the euro area 18, just for Government debt alone. You can safely raise that figure by a factor of 3 to take into the account private sector debts.

Which puts the ECB QE into perspective: at the very best, when fully deployed, it will cover just 1/3rd of the public debt overhang alone (actually it won't do anything of the sorts, as it includes private and public debt purchases). Across the entire euro area economy (public and private debt combined) we are talking about the 'big bazooka' that aims to repackage and extend-and-pretend about 10-11% of the total debt overhang. Not write this off, not cancel, not burn... but shove into different holding cell and pretend it's gone, eased, resolved.

This realisation should thus bring us around to that red triangle and the existential question: What for? Between end of 2007 and start of 2015, the euro area has managed to hike its debt pile by some EUR3 trillion, after we control for GDP effects. Given that this debt expansion did not produce any real growth anywhere, one might ask a simple question: why would ECB QE produce the effect that is any different?

The answer, on a post card, to the EU Commission, please.