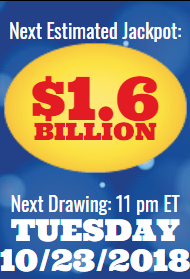 Yes, that headline is correct: The Mega Millions jackpot is at $1.6 billion. With a B.

The estimated cash option for a $1.6 billion jackpot — should a winner choose to take a one-time lump sum payment instead of annual payouts over 30 years — is about $905 million, according to Mega Millions officials.

That's quite a lot of money, which will very likely entice a lot of Americans who normally don't consider playing the lottery into the mix for the grand prize in tonight's Mega Millions lottery drawing. To give you an idea of how stiff the competition will be in the Tuesday evening drawing, about 57% (or 172,467,950) of the 302,575,350 possible combinations of numbers that could be played in the Friday, 19 October 2018 drawing were played, when only a $1 billion jackpot was up for grabs. And now with an even bigger prize at stake, it would be a safe bet that an even larger percentage of all the possible number combinations will be played in the next drawing.

But is the jackpot large enough to be worth your $2.00 to buy one chance to pick win the jackpot? Or to be worth sharing in winning the jackpot if there is more than one player who has also picked the winning numbers?

There are two big factors that factor into the answe to those questions: the odds of winning and the amount of taxes that you would have to pay on the prize you might win. In the following tool, we've plugged in the numbers that are projected to apply for Mega Millions' record high jackpot drawing on Tuesday, 23 October 2018, but you can change it to apply to any lottery drawing. If you're considering playing the Powerball lottery, whose own grand prize in its next drawing on Wednesday, 24 October 2018 will have at least $620 million at stake for whoever beats its 1 in 292,201,338 odds of winning, we another version of this tool set up with its default numbers to answer the same questions. [If you're reading this article on a site that republishes our RSS news feed, please click here to access a working version of the tool.]

Running the default numbers we've entered, we find that the projected jackpot of $1.6+ billion is greater than the "magic" jackpot of $961 million that would make the Mega Millions lottery worth paying $2 for a ticket to play today. At the same time, because the jackpot is currently less than $1.82 billion (double the tool's magic jackpot figure), it's not worth buying a second ticket to play, nor is it at a level that would make it worth paying $2 to play only to have to share the grand prize with one or more additional winners who might pick the same winning numbers.

On the 1 in 302,575,350 chance that you do win, you'll have some decisions to make about how you want to collect your winnings. Be sure to check out this article to consider the relative merits of either taking the lump sum or of taking the annuity payout over 30 years.