Catching up with some data from past few weeks over a number of post and starting with some Russian data.

First, March issue of Russian bonds. The interesting bit relating RUB22.8 billion issuance was less the numbers, but the trend on issuance and issuance underwriting.

First, bid cover was more than four times the amount of August 2021 bonds on offer, raising RUB22.8 billion ($337 million) across
This meant that Russia covered in one go 90 percent of its planned issuance for 1Q 2016, as noted by Bloomberg at the time - the highest coverage since 2011. With this, the Finance Ministry will aim to sell RUB270 billion in the 2Q 2016.

Bloomberg provided a handy chart showing as much: 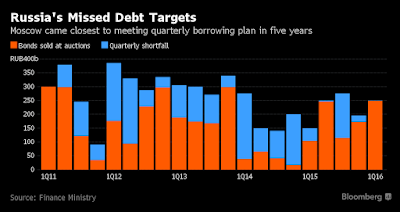 Now, in 2011, Russian economy was still at the very beginning of a structural slowdown period and well ahead of any visibility of sanctions.

Sanctions are not directly impacting sales of Russian Government bonds, but the U.S. has consistently applied pressure on American and European banks attempting to prevent them from underwriting Moscow's Government issues (http://www.wsj.com/articles/u-s-warns-banks-off-russian-bonds-1456362124). Prior to the auction, Moscow invited 25 Western banks and 3 domestic banks to bid for USD3 billion worth of Eurobonds (the first issuance of Eurobonds by Russia since 2013). Despite the EU official statement that current sanctions regime does not prohibit purchases or sales of Government bonds, Western banks took to the hills (at least officially).

The point of the U.S. pressure on the European banks is a simple threat: in recent years, the U.S. regulators have aggressively pursued European banks for infringements on sanctions against Iran and other activities. In effect, U.S. regulatory enforcement has been used to establish Washington's power point over European banking institutions. And the end game was that, despite being legal, sale of Eurobonds was off limits for BNP Paribas, Credit Suisse, Deutsche Bank, HSBC, and UBS, not to mention U.S.-based Bank of America, Citi, Goldman Sachs, JP Morgan Chase, Morgan Stanley and Wells Fargo.

Another dimension of pressure is the denomination of the Eurobond. Moscow wanted Eurobond issued in dollars. However, dollar-issuance requires settlement via the U.S., enhancing U.S. authorities power to exercise arbitrary restriction on a deal that is legal under the U.S. laws (as not being officially covered by sanctions).

Beyond underwriters, even buy-side for Russian Government bonds is being pressured, primarily by the U.S., with a range of European and American investment funds getting hammered: http://www.bloomberg.com/news/articles/2016-03-24/russia-loses-buyside-support-for-eurobond-after-banks-balk.

Russian Government bonds (10 year benchmark) are trading at around 9.26-9.3 percent yield range, well down on December 2014 peak of over 14.09 percent, but still massively above bonds for countries with comparable macroeconomic performance statistics. 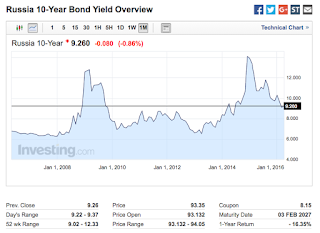 Interestingly, there is a huge demand in the market for Russian Eurobonds, as witnessed by mid-March issuance by Gazprom of bonds denominated in CHF (see: http://www.bloomberg.com/news/articles/2016-03-16/gazprom-taps-switzerland-with-russia-s-first-eurobond-this-year).

It is worth noting again that Russian Government bonds are not covered by any sanctions and are completely legal to underwrite and transact in.

Beyond this, the Western sanctions were explicitly designed to avoid placing financial pressures on ordinary Russians. Government bonds are used to fund general Government deficits arising from all lines of Government expenditure, including healthcare, social welfare, education etc, but also including military spending, while excluding supports for sanctioned enterprises and banks (the latter line of expenditure is linked to funds being sourced from the SWF reserves). Given this, the U.S. position on bonds issuance represents a potential departure from the U.S.-stated objective of sanctions and can be interpreted as an attempt to directly induce pain on ordinary Russians (the more vulnerable segments of the population, such as the elderly, children and those in need of healthcare, or as they are termed in Russian - budgetniki - those whose incomes depend on the Budgetary allocations).

This is a sad turn of events from markets and U.S. policy perspectives - placing arbitrary and extra-legal restrictions on transactions that are perfectly legal is not a good policy basis, unless the U.S. objective is to fully politicise financial markets in general. Neither is the U.S. position consistent with the ethical stance de jure adopted under the sanctions regime.

Big change in EU official language marks a major departure from the past diplomatic practice: https://euobserver.com/foreign/127667. Let's see if this continues, but at the very least, it lays foundations for renewed pressure on Moscow in relation to Ukrainian conflict.

Here is my take on the prospect of the latter.

Rumours of the U.S. (and by proxy EU) sanctions extension include, once again:


All of these proposals, at their extreme, will be firstly painful, but secondly non-reversible in the short- and medium- run.

The latter would signify that any restoration of normal relations between the U.S. (and Europe) and Russia will no longer be feasible even in the medium term and will demonstrably fail President Obama's own test of sanctions as being a tool for influencing short term policies' outcomes without directly adversely impacting ordinary Russians or sacrificing the objective of long-term normalisation.

In financial terms, cutting Russian banks off SWIFT will compound the already significant pressures on Russian corporates and banks, leading to retaliatory measures that will likely see Russian banks and companies suspending repayment and servicing of forex loans to non-affiliated entities based in the U.S. and the EU. This, financially-speaking 'nuclear' retaliation, is feasible given the downgrades of the Russian sovereign debt by Moody's and S&P: the lower the ratings go, the lower is the cost of counter-measures.

In return for this, Western lenders are likely to ask for (and easily receive) court orders to cease Russian assets abroad.

In effect, the worst case scenario here will be an all-out unwinding of Russian economic integration into the Western European and U.S. economies - a process that will make all sanctions irreversible in the medium term. The tail end of this risk is that a more isolated Moscow will face even lower future costs from taking a more aggressive stance in Ukraine or elsewhere. Economic escalation, at this stage, will most likely result in a political escalation along the lines of 'cornering Russia' into retaliation.

But beyond the Russian-U.S./EU theatre of confrontation, there looms another shadow.

In explicitly deploying economic agents and institutions in a geopolitical conflict against a significant global economic player, the U.S. is risking undermining the very foundation of its own economic power and with it, the power of the West. A long-term economic conflict with Russia is putting all emerging markets and non-Western economies on notice: the U.S. markets and institutions can be a high risk counter-parties, controlled and driven by the political considerations. Until now, targeted nature of sanctions has avoided this risk. And until now, SWIFT and its backers in Europe have made a cogent argument that excluding Russia from the system of banks payments clearance risks undermining the system itself. If Russia, in partnership with China, were forced to develop own system of parallel clearance to rival SWIFT, the West will lose control over the financial transactions pipeline that can be monitored and used to combat illicit trade, financing of terrorism and tax evasion. With time, we will also risk losing major transactions flows between other emerging markets and the West, with resultant de-internationalisation of the global financial flows and a reduction in the West's ability to tap emerging markets surplus savings and liquidity to underwrite long-term Western pensions and investment needs.

Similarly, tax evasion has been put on the declining trend by enhanced international cooperation - a process that is now driving the likes of the OECD reforms efforts in corporate taxation. This too will become more difficult to deliver if the global economic systems, largely based on Western institutions, revert toward regionalisation.

As I said, these are tail risks, but they are risks nonetheless.

Furthermore, broadening of sanctions to target explicitly Russian entities and citizens regardless of their affiliation or position vis-a-vis Moscow political regime will have another hefty long-term risk premium. The West is hoping for the sanctions to drive significant economic decline across Russia to effect a regime change, if not in terms of the physical head of Russian state, then in terms of his core policies. However, broadly anti-Russian (as opposed to counter-Kremlin) sanctions are likely to trigger more nationalist revival in Russia and any regime change in such circumstances is likely to lead to an even more bellicose stance from Moscow. Current political opposition within Russia, even theoretically capable of asserting control over power systems in the political and executive systems, is simply much more nationalistic and anti-Western than we, in Europe and the U.S., would like to believe.


None of this should override the consideration of the urgent need to restore peace in and territorial integrity of Ukraine, first and foremost. And, as I said on numerous occasions before, the onus is on Russia to act decisively to make this possible: by forcing the Eastern Ukrainian separatists to implement Minsk accord pro-actively, ahead of the Ukrainian counterparts and with fully verifiable results.

But, in the game of sanctions escalation, longer term losses for both, Russia and the West, will be significant.


It is worth noting that even Mikhail Khodorkovsky - hardly a supporter of the current regime in Moscow - has repeatedly warned against sanctions being deployed as a tool against the ordinary Russians and the Russian economy at large. See here: http://www.bbc.com/news/world-europe-27513321 and here: http://www.enpi-info.eu/eastportal/news/latest/39323/EU-needs-to-differentiate-sanctions-against-Russia,-Mikhail-Khodorkovsky-tells-MEPs.

Another prominent - and actually more important in terms of his popularity and position in Russia - opponent of the current Government, Alexey Navalny also called for strongly targeted sanctions that avoid damaging the economy and, thus, increasing nationalist axis power within the country: http://www.nytimes.com/2014/03/20/opinion/how-to-punish-putin.html although Navalny did contradict himself in some later statements (see for example a report here: http://joinfo.com/world/1001120_Alexei-Navalny-if-not-for-sanctions-Putins-army.html).

Beyond that, there has been significant enough analysts' coverage of the sanctions trap risks - the adverse impact of sanctions on the West's own objectives: the more effective the sanctions are in destabilising Russia, the more they reduce Western capacity to effect change in Russia in the longer run (see here: http://www.ecfr.eu/page/-/ECFR117_TheNewEuropeanDisorder_ESSAY.pdf).
An excellent article on the effectiveness of economic sanctions as a tool in geopolitical conflicts: http://www.capx.co/sanctions-against-russia-are-dangerously-defeating-in-a-globalised-economy/

"Research by the Peterson Institute for International Economics in 1997 showed that, in instances where the United States imposed economic sanctions in partnership with other nations, between 1945 and 1970 they were successful in 16 cases and failed in 14 – a success rate of 53 per cent. Between 1970 and 1990, when sanctions were applied more prolifically, they succeeded in 10 instances and failed in 38, reducing the success rate to 21 per cent. ...Unilateral US sanctions had a high success rate of 69 per cent between 1945 and 1970, tumbling to 13 per cent in the period 1970-90."

Meanwhile, "in economic terms they carry a cost. …the reality is that Russia is the European Union’s third largest commercial partner and the EU, reciprocally, is Russia’s chief trade partner. Who thought it was a good idea to subvert this arrangement?"

"Economic sanctions have the same credibility as poisoning the public water supply in the hope of killing some enemies. Sanctions are not a weapon that can responsibly be used in a globalised economy."

Yep. On the money. Though I am not so sure that "killing some enemies" is even an attainable goal here: so far, sanctions have been hitting predominantly smaller enterprises (via cut off of credit supply) and ordinary people (via supporting currency devaluations). As per oligarchs and Government-connected elites, for every instance where their property abroad has suffered, there are tens of thousands of instances where devalued ruble has made their forex holdings and forex-denominated portfolios of investments increase in purchasing power. So be prepared to see more concentration of economic power in Russia in their hands over the next 12 months.