U.S. growth over the past five years is based “exclusively” on government, corporate and household debt, according to Jeffrey Gundlach, chief executive of DoubleLine Capital, as reported by Reuters (link below). This is hardly surprising. In my forthcoming article for Manning Financial (in print since last week), I am covering the shaky statistical nature of the U.S. GDP growth figures, and the readers of this blog would know my view on the role of leverage (debt) in the real economy as a drug of choice for boosting superficial medium term growth prospects in the U.S., Europe and elsewhere around the world. What is interesting in Gundlach's musings is that we now see mainstream WallStreet admitting the same.

Per Gundlach, the U.S. economy would have contracted in nominal GDP terms (excluding inflation effects) three out five last years if the United States had not added trillions in new government debt. Just government debt alone. “One thing everybody seems to miss when they look at these GDP numbers ... they seem to not understand that the growth in the GDP it looks pretty good on the screen is really based exclusively on debt - government debt, also corporate debt and even now some growth in mortgage debt.”

And if private sector debt did not expand, U.S. "GDP would have been very negative.” Per Reuters report, nominal GDP rose by 4.3%, but total public debt rose by 4.7% over the past five years, Gundlach noted. "Against this debt backdrop and financial markets “addicted to Federal Reserve stimulus,” these are “very, very dangerous times” for the next U.S. recession, Gundlach ...said."

Per CMBC report on the same speech, Gundlach said that “Any thoughtful person would be concerned... It’s sounding like a pretty bad cocktail of economic risk, and risk to the long end of the bond market.”

As reported by Reuters: https://www.reuters.com/article/us-funds-doubleline-gundlach/u-s-growth-would-have-contracted-without-trillions-in-government-consumer-debt-gundlach-idUSKCN1SK2KW and by CNBC https://www.cnbc.com/2019/05/14/doublelines-gundlach-warns-of-recession-cocktail-of-economic-risk.html
As the charts below show, Gundlach is correct: we are in a continued leverage risk super-cycle. While nominal debt to nominal GDP ratio remains below pre-GFC peak, nominal levels of debt are worrying and debt dynamics are showing sharpest or second sharpest speed of leveraging during the current recovery phase. Worse, since the start of the 1990s, all three non-financial debt sources, households, corporates and the Government, are drawing increasing leverage. 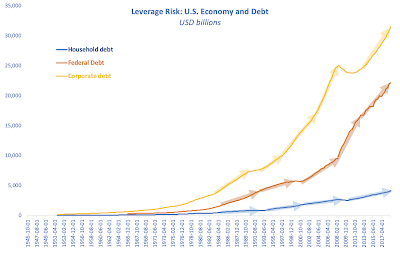 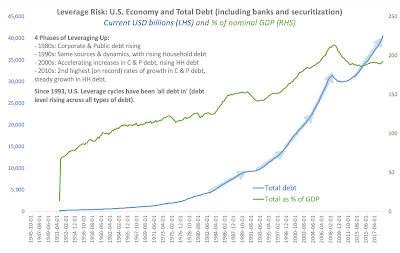