Commonly discussed in the media and amongst economists, generational gap in quality of life and socio-economic environments is also evident in the self-reported satisfaction with life surveys. Here is the recent data from Gallup (link: https://news.gallup.com/poll/246326/six-seven-americans-satisfied-personal-lives.aspx) released back in February 2019: 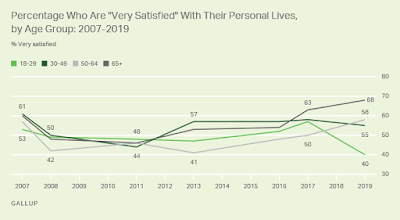 In 2017, 57% of Americans of all ages were very satisfied and 30% somewhat satisfied with their lives. This remained relatively stable in 2019 poll (56% and 30%, respectively). However, over the same period of time percentage of those in the age group of 18-29 year old reporting their status as "very satisfied" with their lives dropped from 56% to 40%, and for the group of those aged 30-49 years, the corresponding decline was from 58% to 55%. In 2007 through 2011, generational gap was at a maximum point 8 percentage points wide. This rose to 16 percentage points in 2013, before blowing up to a massive 28 percentage point by 2019.