Earlier today, an esteemed colleague of mine tweeted out the following concerning Russian foreign reserves: 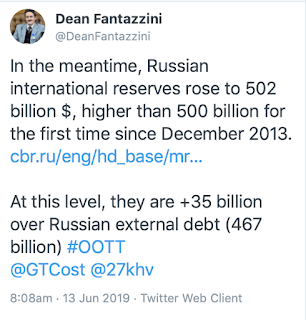 Which is hardly surprising, as Russia has been beefing up its reserves for some time now, following the crisis of 2014-2016 and in response to the continued pressures of Western sanctions. I wrote about this before here: https://trueeconomics.blogspot.com/2019/04/10419-russian-foreign-exchange-reserves.html. 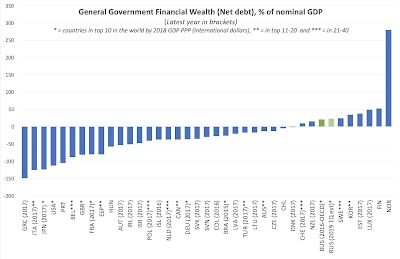 Based on my estimates and on OECD data itself, Russian Government has the largest positive net worth (lowest net debt) of any country in top 10 countries in the world (measured using nominal GDP adjusted for Purchasing Power Parity), and it is in this position by a wide margin.

The caveat is that India, China and Indonesia are not reported in the OECD data. China's Government net worth is virtually impossible to assess, because the country debt statistics are incomplete and measuring the gross wealth of the Chinese Government is also impossible. India and Indonesia are easier to gauge - both have positive net debt (negative net worth). IMF WEO database shows estimated General Government Net Debt for Indonesia at 25.5 percent of GDP in 2018. India has substantial gross Government debt of ca 70% of GDP (2018 figures), and the Government holds minor level resources, with country's sovereign wealth fund totalling at around 5 billion USD.

Another caveat is where the debt is held (Central Banks holdings of debt are arguably low risk) and whether or not assets held by the Governments are liquid enough to matter in these calculations (for example, Russian gold reserves are liquid, while some of the Russian funds investments in local enterprises are not). These caveats apply to all of the above economies.

On the net, this means that Russian Government is financially in a strongest leveraging position of all major economies in the world.