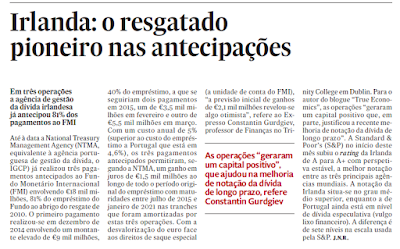 As expected, the IMF announced a revised package of loans for Ukraine today. Below is the statement with some comments.

"February 12, 2015: Nikolay Gueorguiev, Mission Chief for Ukraine, issued the following statement today in Kyiv: “The mission has reached a staff-level agreement with the authorities on an economic reform program, which can be supported by a four-year Extended Fund Facility, in the amount of SDR 12.35 billion (about $17.5 billion, €15.5 billion), as well as, by considerable additional resources from the international community. The staff level agreement is subject to approval by IMF Management and the Executive Board. Consideration by the Executive Board is expected in the next few weeks, following the authorities’ implementation of decisive front-loaded actions to achieve program goals."

So the total package extended to Ukraine is now in the region of USD40 billion. This might be enough, if the hostilities in the East end in the next month or so, and assuming post-hostilities ending, Ukraine regains the regions as a part of at least some Federal structure. Barring that, if the regions gain significant autonomy from Kiev, it is hard to see how the Ukrainian economy can sustain a loss of ca 15-20 percent of its GDP and still fund the debt it will be carrying.

“The policies under the new arrangement, developed by the Ukrainian authorities jointly with Fund staff, are designed to address the many challenges confronting the Ukrainian economy. Economic activity contracted by around 7-7½ percent in GDP in 2014, weighed down by the conflict in Eastern Ukraine, which  has taken a significant toll on the industrial base and exports, undermined confidence and ignited pressures on the financial system. The economic reform program focuses on immediate macroeconomic stabilization as well as broad and deep structural reforms to provide the basis for strong and sustainable economic growth over the medium term."

It is worth noting that in October 2014 WEO, IMF estimated 2014 GDP decline of 6.5% and forecast growth of 1% in 2015, followed by 4% in 2016 and 2017. At an upper reach of the latest estimate, the Ukrainian economy was shrinking at an annual rate of 1.5 percent in Q4 2014. Which is quite surprising as prior to that it was falling by 2.0-2.2 percent per quarter. Meanwhile, EBRD and others are forecasting for Ukrainian economy to shrink 5% in 2015 (a swing of difference of 6 percentage points compared to the IMF dreaming).

Ukraine's “…2015 budget initiates an expenditure-led adjustment to strengthen public finances within the availability of resources. This required bold, but necessary, measures, including keeping nominal wages and pensions fixed. The budget is supported by revenue reforms, including increasing the progressivity of the personal income tax and streamlining the tax system. The authorities are committed to medium term reforms of the civil service and the important health and education sectors, aiming to improve quality and efficiency, as well as widening the tax base and improving customs and tax administration. Fiscal consolidation would continue over the coming years which together with the debt operation envisaged by the authorities will strengthen debt sustainability."

All of this sounds benign, until you think about the impact of these reforms on Ukrainian power base (oligarchs), and foreign investment (sensitive to taxation regime). In addition, behind the 'widening of the tax base' rests a push to increase effective tax burden on general population. Now, consider this: inflation is running at close to 13% pa, hrivna is devaluing, taxes are rising (both in terms of enforcement and rates and breadth of applications), while nominal wages are fixed. And that in a country with GDP per capita (adjusting for PPP) at $8,240.4 in international dollar terms (for cross-referencing, comparable figure is $24,764.4 in Russia). So how soon will there be social unrest boiling up?

Again from the IMF release: “The authorities are firmly committed to deep and decisive measures to reform the critical energy sector. They have developed a comprehensive strategy aiming to foster energy efficiency and independence, increase domestic gas production, and restructure Naftogaz. As part of this strategy, and to rehabilitate Naftogaz while eliminating its drain on the budget, the authorities have decided to implement frontloaded gas and heating price adjustments aiming to reach full cost recovery by April 2017, while protecting the poor through revamping social protection schemes and allocating sufficient budgetary resources. At the same time, efforts are under way to improve Naftogaz’s corporate governance, as well as the framework for payment compliance and recovery of receivables."

What the above means is that cost of energy to middle classes and above will rise and it will rise dramatically. Note two things in the above: one part of this increase will come from eliminating energy subsidies these classes currently receive.  But another shock will come from "eliminating [Naftogaz] drain on the budget" which means that supports for low income earners and the poor in the form of subsidies will have to be loaded onto the rest of the population if Naftogaz were to be a cost-recovery vehicle.

“Monetary policy will be geared toward returning inflation to single digits in 2016 within a flexible exchange rate regime. To strengthen confidence in banks and improve their ability to intermediate credit and support economic activity, the authorities are moving ahead with a multi-pronged strategy to rehabilitate the banking system. The regulatory and supervisory framework will be upgraded, including through measures to address above the limit loans to related-parties; banks’ balance sheets will be strengthened, where needed, following a prudential review of banks; and measures will be undertaken to enhance banks’ asset recovery and resolution of bad loans."

Banking reforms are desperately needed in the Ukraine, as banks are running non-performing loans to the tune of 20 percent and that is before any losses taken on Eastern Ukrainian operations and before we take out foreign lenders who face lower NPLs due to more selective lending to larger enterprises and foreign companies. But driving inflation down to single digits by 2016? Any one can pass the IMF folks a reality pill? Driving inflation down to these levels will require a massive deflation of demand and money supply. Which will cut across bot the above reforms in taxation and wages moderation, and across the banks reforms too.

“Structural reforms will aim at improving business climate, attracting investment and enhancing Ukraine’s growth potential. To this end, the authorities are advancing efforts toward deregulation and judicial reform and implementation of the anti-corruption measures.  They will also proceed with state-owned enterprise reforms, to minimize fiscal risks and improve corporate governance structures and de-monopolization."

All is fine. Except we have no idea what any of it really means. Still, major risk to Ukraine on this front is what will it do replace lost Russian (and other CIS) investments and remittances?


In short, so far, we have very little to go on the IMF latest package fundamentals, but plenty indications that Ukraine is in for some serious, serious social and economic pain in years to come. This pain is necessary. But what is highly questionable is whether this pain is feasible over the 4 year horizon of the new programme. Should Ukraine get some real help: a Marshall Plan with, say at least 50:50 grants to loans ratio and a package worth around USD60 billion over 10 years instead of 4 year loans that only shore up redemptions of other debts?