A great nation, divided and wanting for change as it may be... But just how divided are Americans? Bloomberg chart on a recent Gallup Poll data is quite telling: 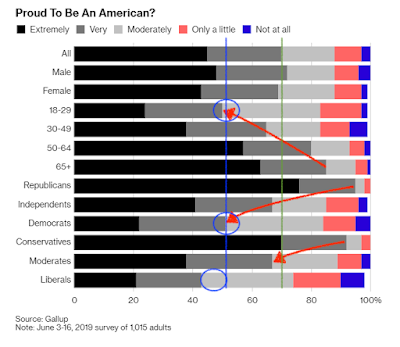 The first thing to note is the demographic divide by age. Less than 50 percent of 18-29 year olds in the survey are 'extremely' or 'very' proud of being American. Less than 2/3rds of those of age 30-49 do as well. For older generations, the same number is 80 percent and higher.

The second is the partisan divide by party affiliation: only 50 percent of those identifying with the Democratic Party are 'extremely' or 'very' proud, against ca 95 percent of the Republicans. The Independents clock in under 65 percent.

Overall, Liberals, Democrats and the young are the flash points of relative disenchantment with the American identity, although the proportions of those who do not identify themselves as proud whatsoever and those identifying as proud 'only a little' is below 1/3rd for all three categories.

The numbers suggest less of a disillusionment problem than the weakening of the sentiment. Which does offer a glimpse of hope: repairing American's perceptions of their identity is not an insurmountable task. The good news, American people do appear to be longing for change and hope. The tougher-to-deal-with news is that we seem to lack leadership candidates to take us there...