While we are waiting for Markit to publish the latest Services PMIs for BRIC economies and the last remaining Manufacturing PMI of the group for India, here are some interesting stats on longer-term outlook in the Russian economy. 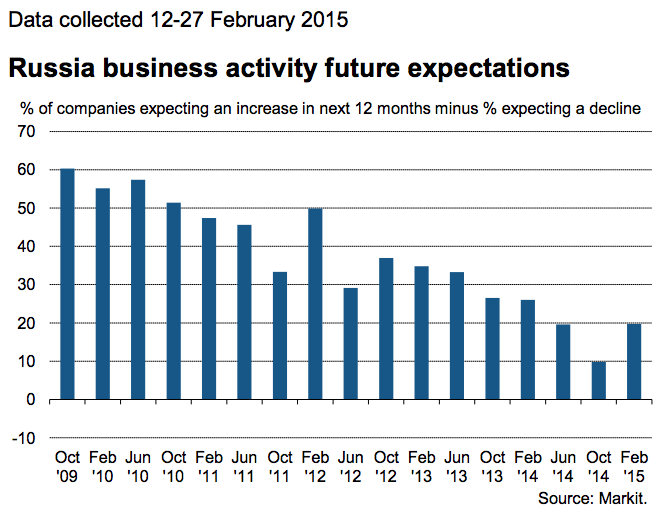 Interesting point: per Markit, "The overall improvement in the business outlook has been driven by manufacturers. The net balance for expected goods production over the next 12 months has risen to +35%, the highest since October 2013." We are seeing effects of imports substitution.
Another point is that Services providers are much less optimistic: "...the services activity net balance has risen only slightly to +12%, the third lowest on record and the weakest figure among all
countries surveyed."
Core drivers for downside in expectations: "general weakness in the wider economy, a lack of working capital, high interest rates, inflation, currency fluctuations and a rising tax burden." Key risk, especially in the Services sector, is Capex: "... firms expect to cut capital expenditure over the next 12 months. The net balance for capex has trended lower since the start of 2013, and has fallen into negative territory in February for the first time, at -2%. This is also the lowest capex net balance of all countries surveyed. Service providers expect to cut capex (-3%) while the outlook at manufacturers is broadly neutral (+1%)."
Considering the above chart, the slowdown in the economic growth has become pronounced in Q4 2013, although structural weaknesses appear to set in around the ned of 2011. This is also consistent for the BRIC group overall as shown in the chart below: 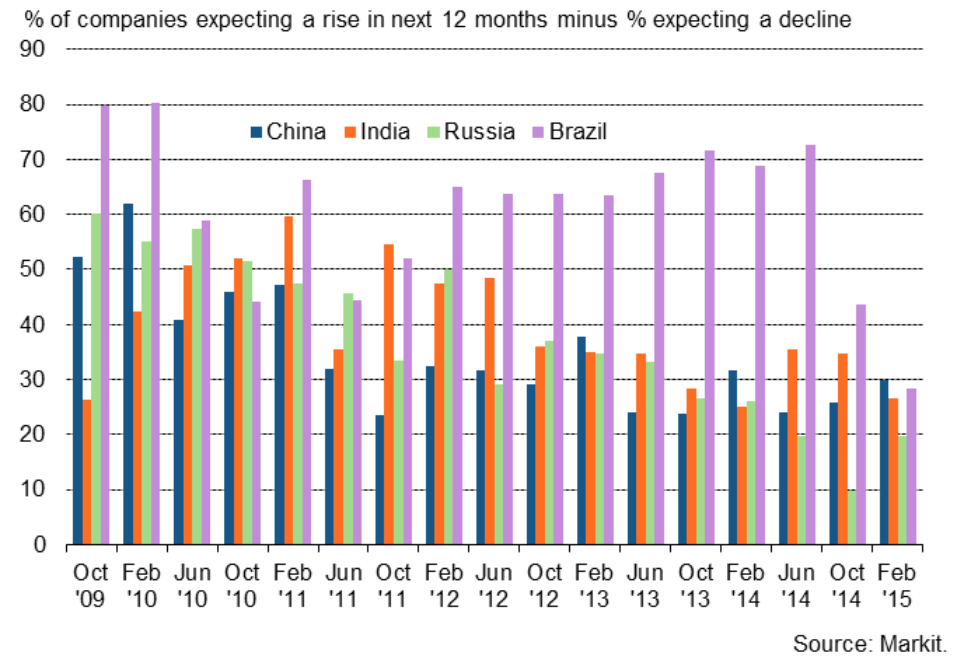 Excluding Brazil (see my PMI analysis of the BRIC for more on this) all other BRIC economies have posted a sharp drop in expectations starting with Q1 2012. This trend remains persistent through Q1 2015, with Brazil joining the line up in full in Q1 2015.
Not a good sign for the global economic growth prospects...
As I highlighted a week ago here: http://trueeconomics.blogspot.ie/2015/03/18315-russian-deposits-dollarisation.html, Russian households are starting de-dolarising their accounts in the wake of some regained confidence in the Ruble and the banking sector:

Now, the Moscow Times (h/t to +Russia Insider ) is covering same trend: http://www.themoscowtimes.com/business/article/ruble-panic-recedes-as-russians-start-selling-dollars/518053.html
However, not all is well, still and risks remain. Here is BOFIT analysis of the forward risks relating to oil prices and the banking sector (more on the latest forecasts later on the blog): "If the oil price remains, as assumed, at around USD 55 a barrel, and despite savings decisions, the federal budget deficit is set to grow so large in 2015 (to about 3.5% of GDP) that the government Reserve Fund may be eroded by as much as a half. It is possible that support measures will be implemented using government bonds (as in the bank support operations in December 2014, which amounted to 1.4% of GDP). The support operations can also draw on debtors’ bonds (as in the funding of the state-owned oil giant Rosneft, which was just under 1% of GDP). Where necessary, banks can use both instruments as collateral against even relatively long-term central bank funding. Recourse to the central bank has already become more substantial than ever before."
And more: in the face of oil price risks, "Bank panic situations where households and enterprises withdraw their funds from banks are possible, even though the authorities have intensified banking supervision. On the other hand, the Bank of Russia is ready to take immediate support measures."
All of which means that from the macroeconomic perspective, the current reprieve in dollarisation trends can be temporary. Over the next six months, I still expect continued decline in investment, with private sector capex depressed by a number of factors that are still at play: the Ukrainian crisis, the looming threat of deeper sanctions and oil price risks. State enterprises and larger state banks are likely to continue cutting back on large debt-funded investments and more resources will continue to outflow on redemption of maturing corporate and banking debt.
So keep that seat belt fastened: the bumpy ride ain't over, yet.
A neat comparative of the extent of the recent Ruble crisis in a historical context (note: this prices Ruble devaluation at ca 58%, presumably to the USD, is for the peak crisis, while current valuations imply y/y devaluation of 47%). 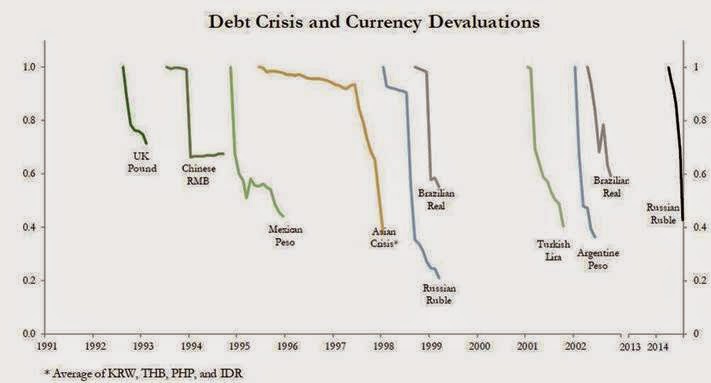