With 'booming' and 'tight' labor markets, the White House is only happy to argue these days that we are in a Golden Era of employment/unemployment for all, including the African Americans. Is this, in fact, the case?

Firstly, I am not too keen on the arguments that any President in office should get the credit for jobs creation. At the very best, Presidential decisions simply support jobs creation by the private sector, and can be instrumental in creating jobs (albeit less in sustaining them) in the public sector. Secondly, jobs are just numbers, unless they are distinguished by their quality - something that is hard to do.

But the White House claims are usually about the aggregate jobs numbers / statistics, as opposed to the more granular analysis. So it might be worth taking them to the test.

One comparable - across different cohorts and time periods, as well as business cycles - metric is that of employment to population ratio. It takes total number in employment and divides it into the total population of working age for a specific group. Here is the chart (data from FRED database with calculations performed by myself): 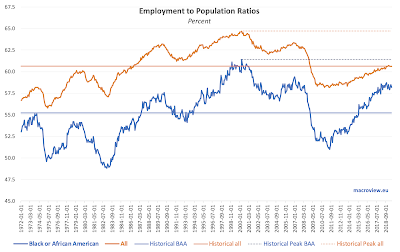 What about the historical positioning of the gap between the overall population E-to-P ratios and that for the African Americans? 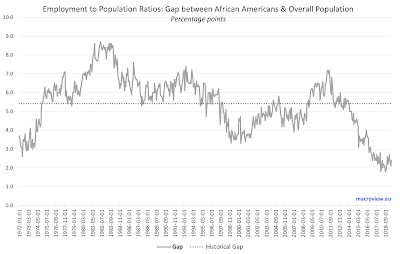 The gap between the employment-to-population ratio for the African Americans and that for the overall population is around the lowest levels it has ever been and is well below the historical average.

So, yes, the claims that employment has been relatively strong for both the general population and for the African Americans pans out to be true in at least this metric, which is - as noted above - by far not the only metric that matters.