Increasing market power concentration, falling entrepreneurship, rising concentration amongst the start ups, unicorns and billions in investment, the markets have been rewarding larger companies at the expense of the smaller and medium enterprises for years. And this has had a problematic impact on human capital and jobs creation.

Here is the data on the levels of employment in medium-large companies over the years, based on the U.S. markets data: 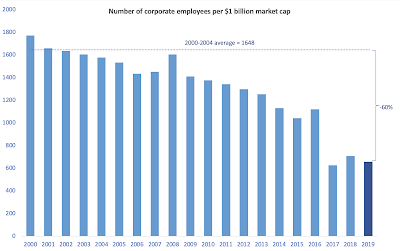 In simple terms, per each dollar of investors' money, today's companies are creating fewer jobs - a trend that was present since at least 2000, and consistent with the onset of the Goldilocks Economy. But the most pronounced collapse in jobs creation from investment has been since 2017. Excluding recessionary periods, in 2002-2006 average annual decline in the number of employees per $1 billion in market valuation was 3.45%. Over 2009-2013 this number rose to 4.73% and in 2014-2019 the rate of decrease averaged 8.05% per annum.