We are living in the Great New Era of Entrepreneurship that started in 2013 (according to someone at Forbes) and the academia is pumping high entrepreneurship training and education (the Golden Era, according to some don from Stanford). Living in all of this 'game changing' stuff around you can be daunting, inducing FOMO and other behavioural nudges toward dropping everything and launching that new unicorn doing something disruptive and raking in the miracle dollars that everyone around you seems to be minting out of thin air. Right?

Well, not so fast. Here's the data from the U.S. - that 'super-charged engine of enterprising folks': 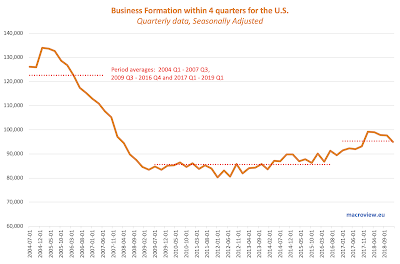 Hmm... anyone can spot the 'New Era' in entrepreneurship out there, other than the one with historically low rates of business creation?