In the wake of the extremely sad events of the last two weeks, it took me some time to run through the data from the https://www.gunviolencearchive.org/ on mass shootings in the U.S. 2014-2019 (to-date), and the numbers are shocking. The El Paso, TX shooting of August 3, followed by the Dayton, OH incident on August 4  (with combined numbers of those killed or injured at 82 with 30 people dead, may they rest in peace) have shaken the world (see, for example, https://www.nytimes.com/2019/08/06/world/europe/mass-shooting-international-reaction.html).

Here is a summary table on U.S. mass shootings over the last 5 years and 7 months: 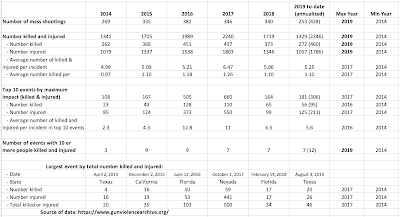 Here is a summary of the 26 largest mass shootings on record: 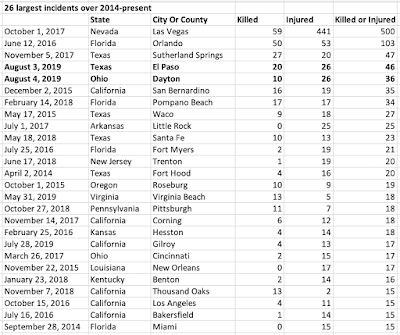 There appears to be little in terms of distributional trends, especially given small number of years in data coverage, but so far, data suggests that there can be an ongoing increase in the number and severity of mass shootings over the years, with 2019-to-date reconfirming 2016-2017 dynamics that were partially reversed in 2018. 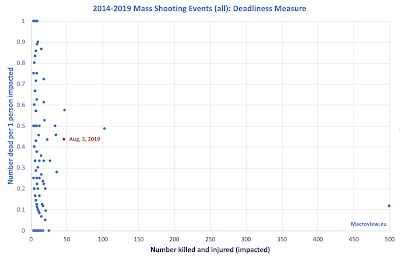 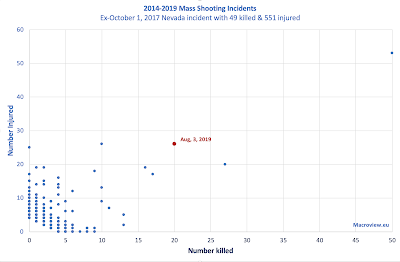 The impact of these horrific incidents is, of course, far deeper-reaching, touching the lives of those close to people killed or injured, as well as those in public vicinity of those directly impacted. There is also an unquantifiable broader impact on the society at large. We need better data to better understand these deeper and broader impacts.

We also need better data to try and decipher any causal links and drivers for these horrific crimes. And we need more analysis of the deeper roots and causes of these.


As a tail end of the post, my deepest sympathies to the families and friends of those taken away by the gunmen in mass shootings, and indeed by all gunmen in all guns-involved violent events, and my best wishes for full and speedy recovery for all those injured by them.