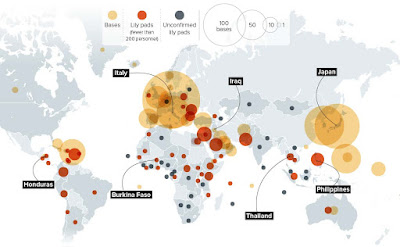 Thirty years after the end of the Cold War, one country remains completely and comprehensively surrounded by the U.S. military deployment platforms (and these exclude non-U.S. Nato platforms): Russia.

The map does not show the U.S. navy and airforce reach zones, nor does it include Nato's non-U.S. troops bases.

Some 'Peace Dividend' this is, especially given the threat rhetoric from Washington. And any wonder, Russian geopolitical stance remains that of a country under the siege?