Given the never-ending repetition of the 'austerity narrative' in European economic analysis, it is virtually impossible to conclusively address the issue of changes in public spending during the crisis and the post-crisis periods and the relationship between fiscal policies and economic growth. Thew reason for this is the lack of singular set metrics that can capture these dimensions of the debate.

However, this lack should not be a reason for not trying. 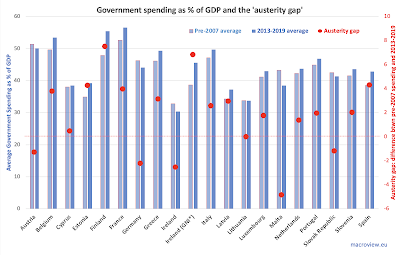 The picture is worrying. Thirteen out of nineteen euro area economies have witnessed a rise in Government spending as a share of GDP in post-crisis period compared to pre-crisis period, two experienced virtually no change, and four experienced declines. In other words, based on the ratio of Government spending to economic activity, only four states exhibit a clear case of 'austerity'.

Ireland is an interesting outlier to the picture (hence, reporting of GNI* metric): based on GDP measure, Ireland's Government spending as a share of GDP averaged 32.85 percent per annum in 2000-2007, and this fell to 30.32 percent in 2013-2019 - an austerity gap of 2.53 percentage points per annum. But based on GNI* measure, Ireland's Government spending rose from 38.69 percent in pre-crisis years to 45.51 percent in post-crisis period - an expansion gap of 6.82 percentage points.

Overall, using the above metric, top austerity countries in the euro area are: