Value added by the U.S. non-financial corporates has been languishing well below the cyclical peak for some months now: 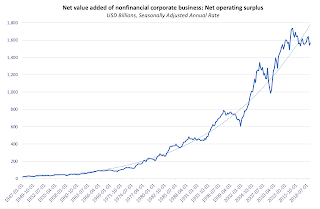 In fact, since Q3 2016, net value added by the non-financial corporations has been running below long run trend, and has been basically flat. This suggests substantial pressures build up in the economy, consistent with all previous early indicators of a recession. Interestingly, there is zero evidence of any improvement in the non-financial economy in the U.S. since 2016 election.